gardening with children – choosing the seeds 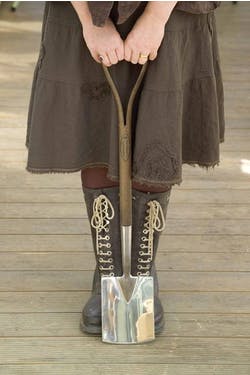 Gardening with children can be one of the most rewarding things.

Older children should be able to follow the step-by-step instructions themselves, with younger children probably needing some help.

According to what space you have available and what everyone likes to eat, you will almost certainly want to make your own adaptations.

In 2010 I decided to give Molly a good bit of the garden to grow food. It's tempting to place your children's patch in some grotty corner, with only a few square feet, but in that scenario they are unlikely to be able to make even an attempt at growing what they eat. And that's the whole point: to grow, pick and eat their own food.

We have the gift of space at Perch Hill, so Molly took over a 3.3m x 6m (11ft x 20ft) patch and on it grow the vegetables, fruit and herbs that she particularly liked. She decided what she wanted to grow and I advised which varieties work best for flavour, disease resistance and a long, slow cropping pattern.

So what was on her list? Molly's favourite vegetable is broccoli – which seems to be lots of children's first choice. She loves stir fry and broccoli is a key ingredient. The trouble with this plant is that cabbage white butterflies love it too, so she had to grow this under brassica nets to keep them at bay.

The large heads of calabrese are what many of us think of as broccoli, but Chinese tender-stem broccoli 'Kailaan' is much longer producing. Like a summer purple sprouting, if you keep picking this, it keeps producing and the long, thin stems and small heads have delicious taste and texture.

Next on her list were potatoes. She loves mashed potatoes and, even better, the crunchy, waxy, new potato version with olive oil, garlic and rosemary that is finished in the oven.

For this we chose potato 'Nicola', a waxy and wonderful-tasting, healthy new potato and 'Harlequin', a hybrid between reliable 'Charlotte' and the famously tasty but late and very blight-prone 'Pink Fir Apple'.

I trialled both these newish varieties in the garden in 2009 and they tasted fantastic, had a lovely texture and, despite it being a very wet summer with plenty of blight around, were not affected.

High on Molly's list were also globe artichokes. These would not ideally go right in the centre of a rotating patch of veg as they're perennial, but Molly won me over on this and in they went, maybe to be moved at a later date. You propagate artichokes in the spring in their second or third year, taking offsets, so that's a job we did together in the following March.

Molly also loves carrots, chillies and tomatoes. The carrots have to be raw to be eaten by the bowl load, ideally freshly pulled straight out of the soil.

We sowed carrot 'Nantes' in the following few weeks and then another sowing of carrot 'Sytan' in April. I stand by this carrot as other new varieties come and go. It has fantastic flavour, seems to resist the root fly better than any other and does well even on our heavy clay soil.

When we go to lunch at Wagamama, Molly always has the chilli chicken ramen. This dish gets even chilli-hardened me in a bit of a sweat, but she loves it, so she's growing chillies. The most reliable variety in our climate is 'Hungarian Hot Wax'.

It has a long productive season, starting much earlier than others at the end of June, and continuing well into the winter. That's ideal for growing outside, where it will crop through the summer, but we dug up the plants and potted them up to grow on through the winter in the greenhouse. Chillies are tender perennials and, kept above 5C (41F), they should survive.

Tomatoes cut up with mozzarella in a salad also go down well, so Molly grew the outdoor classic, tomato 'Sungold'; it is the sweetest tomato you'll find, with lovely warm orange-yellow skins, and it usually does well outside with protection from the wind.

We also tried Tomato 'Noire de Crimee', this comes from the Crimea, a part of the world with a similar summer climate to our own. This huge, juicy-fruited, dark-skinned variety will do better growing outside than the more widely available, softy, sun-loving Mediterranean forms of tomato.

Molly has a new-found passion for salad. She wouldn't touch it until recently but, with French dressing, she now really tucks in. She doesn't like the hot and peppery leaves, just "boring", gentle lettuces, so I recommended that she grew Lettuce 'Green Salad Bowl' and Lettuce 'Cocarde'. These are cut-and-come-again, so she could pick from them a couple of times a week and they continued growing. They look and taste good together, both in the garden and in a salad bowl.

To add to this she had parsley – flat-leaved as it has a softer texture than curly English – basil and her all-time favourite, coriander. She likes plenty of this in her green salad, in stir-fries and scattered over sliced tomatoes.

Molly is also keen to have fruit, so she added a line of raspberries on one edge and four crowns of rhubarb. Ideally we'd leave these for a year to settle in before picking, but I bought her plants in pots so, all going well, they were one of the first crops she picked. Rhubarb crumble beckoned. Rhubarb needs to be in a permanent slot as it's an herbaceous perennial and will take some shade.

Molly loves dipping cucumber into hummus and taramasalata, so the mini Lebanese cucumber types that will climb up the tepee are ideal. She sowed cucumber 'La Diva', but the old-fashioned round cucumber, 'Crystal Lemon' would do just as well.

With her plan complete, we ordered the seeds and next week we started sowing.

Read Part 2 and Part 3 of our Gardening with Children guide.