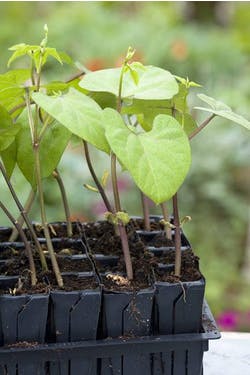 If you're interested in gardening with children this 3 part series will help you start a children's veg patch. In this final part you can learn about planting out your seedlings and harvesting your crops (read part 1 and part 2).

Things were really happening in Molly's area of the greenhouse, with seedlings popping up on a daily basis in the pots and trays we sowed.

To encourage things to come through as quickly as possible, everything was sitting on the heated bench, covered with sheets of newspaper or with split open, empty compost bags. This keeps the warmth and moisture in, so the seeds are germinating quickly.

Uncovering them, morning and night, to see what's come up in the hours in between is one of my favourite occupations, and Molly was getting addicted too.

All her seedlings – broccoli, carrots, chillis, tomatoes, lettuce, parsley, basil, coriander, French beans and cucumbers – are quick and easy to grow and bringing them all to life is a hugely rewarding process.

As soon as they have unfurled from their seed case, it's vital that everything is uncovered and grown on in full light. Left warm, moist and in the dark, they'll grow at a lightning rate, with stems as thin as a thread – which is a disaster.

Uncover them on the first sign of green and move them to a bench with no or little heat at their roots. The seedlings then grow on slowly, producing good, strong, stocky plants. The best and most productive annuals are exactly that – Jonny Wilkinson types, not willowy, leggy little wimps.

We had our work cut out looking after the seedlings, but there were also things to be done to prepare the patch in the garden.

The site and situation Molly's patch was in was a prime spot, in full sun, away from over-hanging trees. That's important, as most of the plants in her plan are annuals. They are working on a short time-scale and need to grow rapidly.

To enable them to gain size at such a rate, they needed all the help they can get and plenty of food to fuel the process. That's only possible in full sun.

As well as sun, many of the plants such as tomatoes, cucumbers and chillies need shelter from the wind. They wouldn't grow well if they were rocked at their roots and if their leaves were blackened with wind burn.

I found a hotch-potch of fencing panels and hurdles which we could push in on the windy, west side of the garden. These gave the more delicate things a chance of survival outside. If you can't find hurdles, invest in a few straw bales. These provide a cheap, but perfect temporary wind-break, which can be removed once the worst of the spring winds are over in early May.

It's worth knowing that a wind-break will protect a horizontal area about five times its height, so you may need to repeat the barriers through the garden to give full protection.

The next thing for us to think about in Molly's garden was the soil. For a perfect patch, this needs to be freely drained, with plenty of organic material mixed in. Some of the selected plants would do fine without much fertility – carrots, for example, grow well in almost pure sand. But most of the other plants do best in well-fed, rich soil that is well-drained.

Molly was bored by the prospect of soil-conditioning, so it's down to the rest of us to dig in grit and organic matter. The veg garden had already had some soil improvement but her bed needed a little more.

The grit we used is 9mm pea shingle from a local builder's yard (rather than the more expensive horticultural grit). This is the smallest stuff for putting on a drive and it did the job well. For organic matter, I used municipal compost or our own home-made.

If you garden on light sandy or chalky soil, dig in lots of organic matter to help the plants grow well, but leave out any extra grit. If your top soil is very thin, this may mean coming up with raised beds. We need these at Perch Hill.

With an intensive patch like this, it's good to make sure you clear the soil of perennial and annual weeds before you plant. Dig it over in the autumn, making sure to pull out any couch grass, bindweed or ground elder.

It's also good to cover the patch in early spring. This helps warm and dry the soil so you can plant or sow a couple of weeks earlier than if you left the patch open to the elements. We used sheets of clear plastic on Molly's patch.

Because they are transparent, they encourage the germination of any dormant weed seed. When you uncover the patch to plant, the resulting seedlings are easily cleared with your hands or a hoe and you should then have a clearer bed.

The other key thing with weed control is using a carpet of mulch to stop any weed seed drifting in from next door and germinating in your soil. As we planted out Molly's seedlings in April, we laid a good couple of inches of organic mushroom compost or leafmould in between her rows. This made the patch weed-free through the summer and easy to maintain.

The final job before planting was to translate Molly's garden plan into reality. The patch was rectangular and she planned paths which crossed to meet in the middle. I suggested she makes the paths from spreading grit 5-6cm (2-2.5in) deep. At a later date, this was dug in to help aerate the compacted areas where her paths had been.

Where the paths met, she drew a teepee over which her climbing French beans and cucumbers gre. Having a high point in a productive garden is always a good idea, giving a central emphasis and a stronger feeling of design.

We made her tepee from silver birch cut in the wood. The great thing about birch is that you can weave with it, as with willow. But, unlike willow, it won't root in the soil. If the silver birch is cut in the early spring when the sap is rising, but before the leaves have emerged, it will be soft and pliable.

We stuck six 2.5-3m (8-10ft) branches in the ground at regular intervals in a circle and then tied them together in the middle. Next, the twiggy side branches were collected together in three or four layers, all the way up its sides, and woven.

This gives a strong structure and more of a framework over which her plants could climb. Within a month we had stuff growing in Molly's garden and the first meals of the quick crops – the salads and herbs.

Then it was her turn to pick supper and, with a bit of help on recipes, transform her harvest into a delicious meal!

Thanks for reading this series – I hope you enjoyed it.

Please see our Seeds to Sow Now guide, and our Seasonal Recipes for more information. And don't forget to catch up with our latest videos on YouTube.