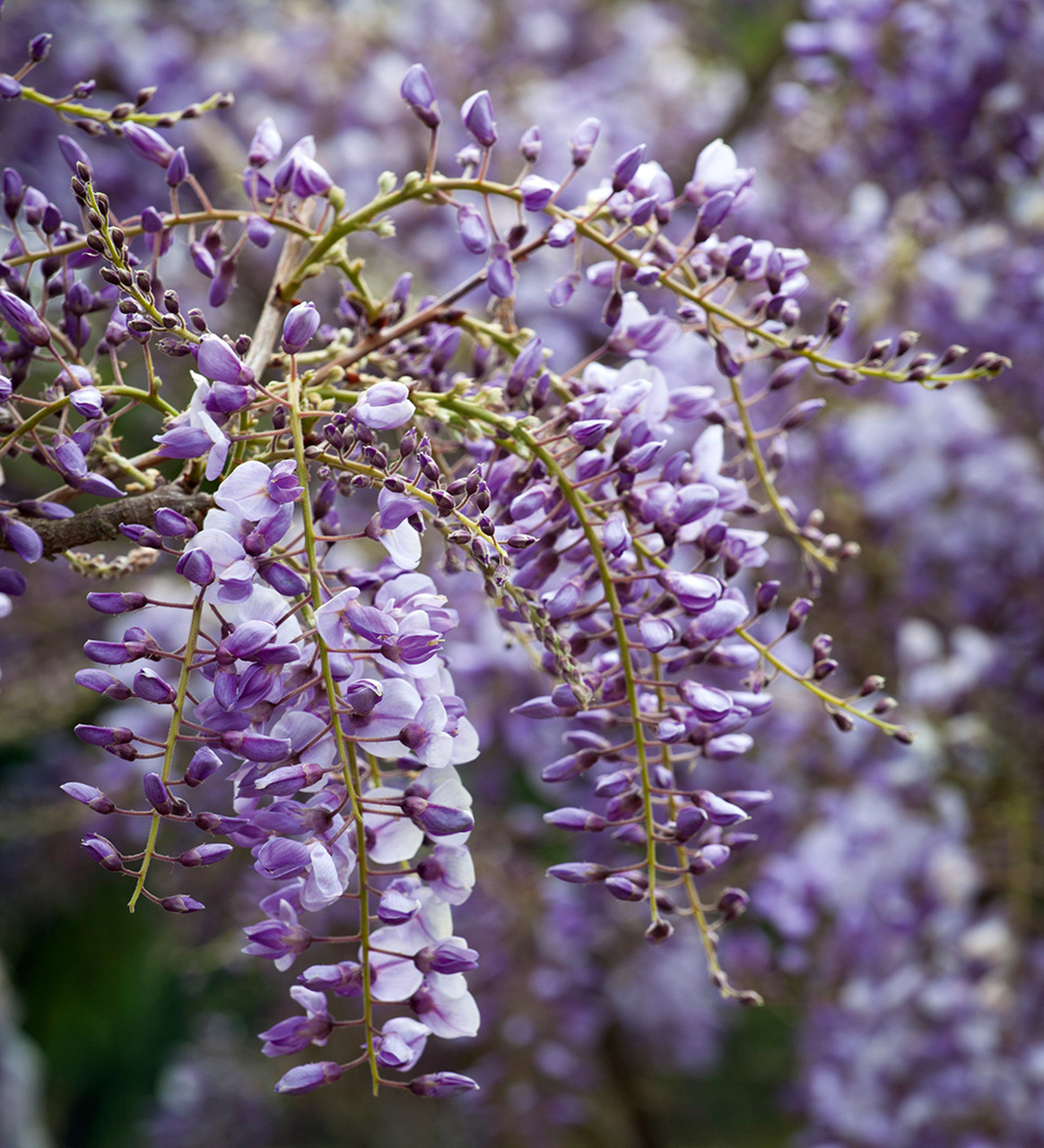 The benefits of a rain-sodden spring are not many, but a glorious, colourful display of wisteria is one!

Imagine walking through a wood at this time of year in the hillier, wilder areas of Honshu or Shikoku Island in Japan and coming across a stream valley where almost every tree is dripping with wisteria. In thickets and woods, Wisteria floribunda is a common native there and is about to reach its flowering peak, filling its glades with that characteristic fruity, tuberose, mildly camphory scent. What a vision of spring paradise.

You’ll see it growing – like our native honeysuckle or clematis in a British wood – with its roots in light shade, but clambering up so its flowers bask in sunshine. Plant it on a tree here and it will seek out the warmth and light very quickly, cladding the south side much more densely than the north.

Being legumes, wisteria doesn’t need feeding – they fix their own nitrogen – but they love it hot, and revel in lots of water when flowering. A very wet spring will produce late blooms, but when they do come, their racemes – the hanging flower spikes – should be longer and more spectacular than ever. They love the sun, but once the flowers are fully open their colour will bleach after a few days in strong sunlight.

I remember seeing a gnarled, very aged and distinguished plant stretching more than 100ft, cladding the balustrade at the entrance to the Palladian Villa Emo in the Veneto in the north of Italy. You walked up the steps through its fragrant cloud for a good five minutes if you took it slow.

You’ll get a similar sensation if you visit the garden at Sissinghurst in the next week or so. There, the late-flowering white floribundas planted by Vita Sackville-West all along the Moat Walk wall, which now have trunks the size of a rugby player’s thighs, are about to be at their best, mixing their fragrance with Rhodendron mollis to perfume that whole stretch of the garden.

But you don’t have to have Tudor walls or Palladian stonework for wisteria to look good. What could be nicer than a wisteria decorating a tree, or embroidering a walkway or arch? It drapes any background or frame with lace – with a touch of Medusa’s hair added in.

It’s the floribunda varieties that are your best bet for this sort of climbing-frame. They come in a range of subtly different mauves, purples and pinks. Some (such as W. floribunda 'Royal Purple’) have more blue in their tone, whereas others are a delicate mauve-pink.

Chris Lane, who has a wide wisteria range at the Witch Hazel nursery near Sittingbourne in Kent, reports that it’s the paler, lighter pinks that the ladies like best. As he says, it’s women who buy 80 per cent of the plants, so those are the people — as a nurseryman — you want to please. His female visitors often pick out 'Kuchi-beni’ for its lovely colour and good scent. 'Lavender Lace’ is another widely available floribunda and a good all-rounder in purple-mauve, but my favourite, 'Kimono’, is a smokier colour with a rich deep amethyst flower calyx contrasting beautifully with pale flowers.

If you’re after length of flower spike, it’s W. floribunda 'Macrobotrys’ that you should choose. This is mauve with a deeper colour at the tip of the lip, very pale wings and a primrose yellow splodge at the heart. It always looks good from the moment when the flower buds appear and start to elongate, until every bud is fully open and flowering. It flowers from the top down and continues to elongate as the spike develops, giving it super-whopper racemes. These have been recorded at an incredible 5ft (1.5m) in Japan and in the warm and wetter states of Australia, making it the ultimate variety for a pergola – the leaves hold well above so do not obscure the dangling flower trusses.

Earlier to flower and excellent for the south face of a house are the Wisteria sinensis varieties. These are going over now, but they are hugely floriferous and flower well before the leaves appear, so they give an excellent show. Trained over the front of a house, they look like an Edwardian Kipling-style moustache, curling forwards a little before hanging down, and their powerful fragrance is lovely drifting in through open windows and doors.

Chris’s recommendations for W. sinensis forms are 'Jako’ in a pure white, and the mauve 'Prolific’ and ' Amethyst’, the first slightly bluish in tone, the second a more rosy mauve.

In the smaller garden

As Chris says, the simplest way to grow a wisteria in a small garden is up a solid post, trained as a standard, puffing out at the top, with the flowers trailing down. They’re then so easy to prune, with no stepladders and precarious balancing involved.

For this he recommends the short flower spike floribundas, such as 'Domino’ or the little-known, early-flowering Wisteria brachybotrys. These come in a lovely colour range, from 'Shiro-kapitan’ in white, to 'Okayama’ in mauve and 'Showa-beni’ in a clear, bright pink.

These all have fantastic scent and much larger, chunkier flowers, with broader petals and shorter, stockier racemes. They don’t have quite the grace and elegance of the trailing floribundas, but they have a certain meaty exuberance that means they can hold their own when competing with other shrubs and perennials in a general mixed flower bed.

Finally, on wisterias, the most asked question – why does mine never flower? Many wisterias are grafted, often on to a stronger-growing but less floriferous form. If you fail to prune out all the long triffid growth that forms near the base of the plant – at a foot or below on the main stem – this is likely to come from the rootstock and will outgrow the grafted variety you’ve selected and smother the more desirable form. From the word go, prune all basal growth right back to the main trunk, and in summer remove all the whippy growth, which can get to tens of feet long. Prune again in winter to tidy up your plants to a firm framework.

Chris’s advice is not to fuss about pruning. You can cut wisteria back hard – not even bothering to look for buds – and it won’t bat an eyelid, still flowering well the following year. If you’ve got a plant that hasn’t flowered for several years, it is best to discard it, as its lack of flowers is almost certainly due to the predominance of the original rootstock. So with wisteria pruning in general, the advice is – be drastic.