clematis for every month of the year 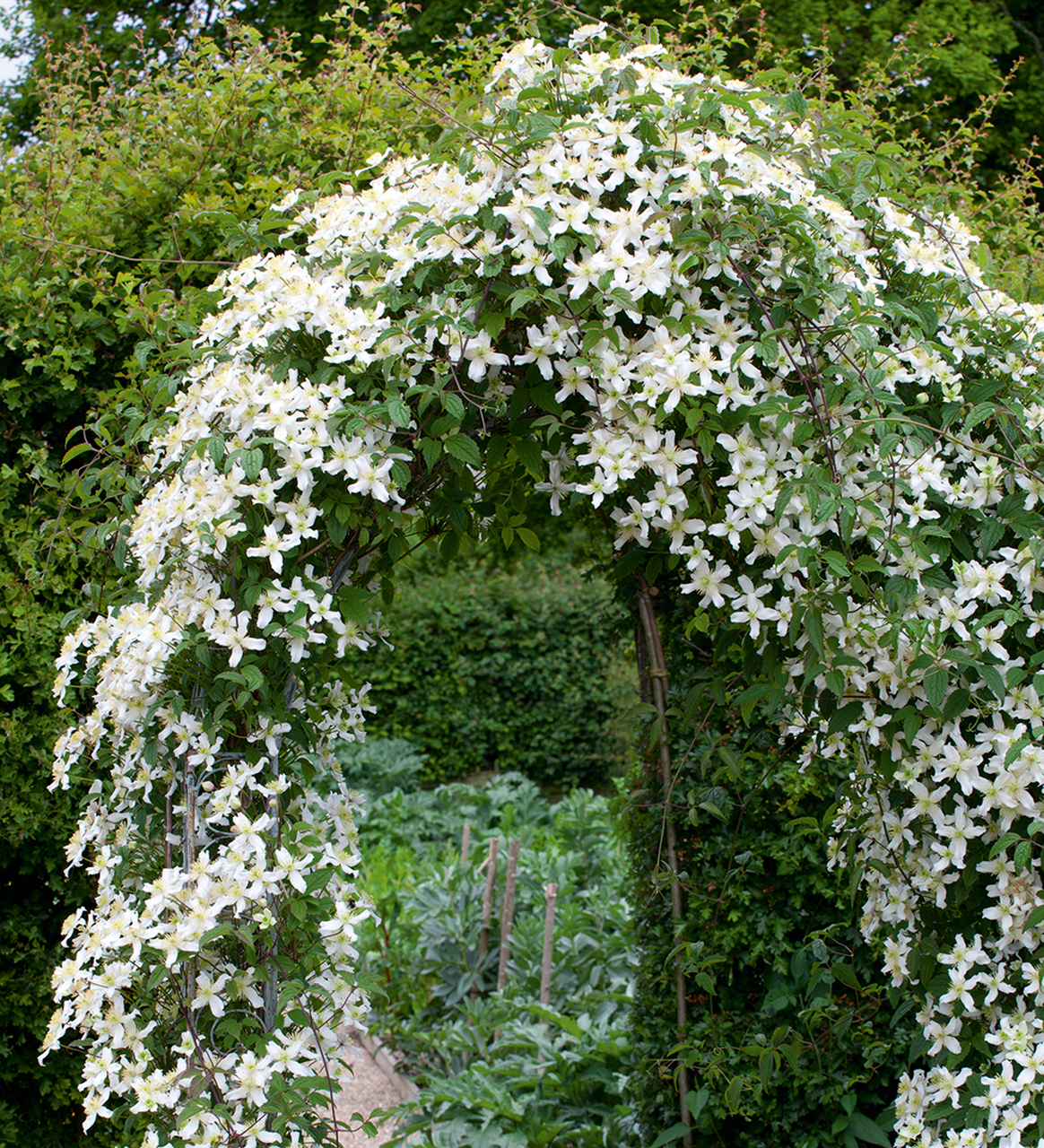 Clematis are among the showiest of climbers ­– and a garden with climbers is a place that feels as though it has come into its own. No longer a randomly selected patch of cultivated earth, it is a three-dimensional flowering world, a space that envelops you and makes you feel at home.

Wouldn’t it be nice to have at least one clematis in flower all 12 months of the year, those flowering walls and curtained branches always around you? It’s perfectly possible, because this huge plant family spreads itself neatly through the calendar.

If we start now in June, it’s from the early large-flowered clematis that we should choose. The blue-mauve ' Perle d’Azure’ gets all-round praise. It’s the favourite of Alexis Datta, the head gardener at Sissinghurst. There are seven or eight plants on the curved Powis Wall. With weekly tying in before flowering, this clematis reaches the top of this vast wall and makes one of the best plant sights you’re likely to see.

My gardening hero Christopher Lloyd was always a big clematis fan. One of his favourites for this time of year was the reliable and long-flowering Clematis 'Prince Charles’. This is covered in light blue flowers from late June until the end of August. It looks similar and is in the same group as 'Perle d’Azur’, but those in the know think 'Prince Charles’ is even better and more reliable. It is very resistant to clematis wilt and incredibly free-flowering. It doesn’t get as gangly as 'Perle d’Azur’, and does not succumb to mildew.

'Prince Charles’ makes a fantastic combination with climbing rosesor, as you’ll see at Great Dixter, growing up through shrubs, such as the equally long-flowering pink hebe 'Watson’s Pink’. Both 'Perle d’Azur’ and 'Prince Charles’ like a sunny spot with well-drained soil. Once established, they should be cut back to 18-30in in late winter.

The viticella hybrids are also just coming into flower. These tend to be in the richest colours, with petals cut from plush silk velvet, and there are some brilliant and reliable forms. There are three, all with the Award of Garden Merit (AGM), I find totally irresistible. ' Madame Julia Correvon’ is rightly popular, flowering from late June until the end of September. Like all viticellas, this is a slender, deciduous climber, perfect for shimmying up posts and through shrubs and trees. Another couple of famously rich-coloured good viticellas are Clematis 'Étoile Violette’, if you prefer a deep purple to a red-crimson, or for colour in between the two, 'Royal Velours’ in a red crimson-purple. These are both equally good, tough, reliable and free-flowering.

I have 'Étoile Violette’ with Rosa 'Cerise Bouquet’ growing up through Elaeagnus 'Quicksilver’ and it’s one of my favourite plant combinations. As a group, the viticellas are the easiest clematis to grow, wilt-resistant and happy in most soils and in positions, although they prefer sun. Pruning is easy – simply cut back to 12in in late winter.

Of the less well-known, another of Christopher Lloyd’s favourites was the species, C. uncinata. This doesn’t look much, making huge evergreen vines, with matt, dark green leaves and small starry white flowers like a small-leaved armandii, but its scent is incredible at this time of year.

The garden designer and writer Mary Keen recommends Clematis 'Gravetye Beauty’ to follow on from these in August. This is a Clematis texensis hybrid, which Mary loves for its lateness and elegance and its cherry red colouring. The texensis hybrid group tend to die off to ground level or nearly so in winter but climb up again and start to flower in late summer.

Once in bloom, they continue to produce flowers on new growth until the frosts and they have good seed-heads. They are best on good, well-drained soil in a warm, sunny spot. 'Gravetye Beauty’ is not the most vigorous, so is best grown through smaller shrubs rather than trees. You need to tidy this up in the winter.

Mary also rates the rarely grown Clematis rehderiana as another late flowerer to take us into the autumn. This starts to bloom in midsummer and continues to October, with elegant bell-shaped flowers in a pale yellow, washed green, with the scent of cowslips. It’s a whopper and will grow to more than 20ft to cover a house wall, given some wires and support.

Carrying on with autumn-flowering clematis with delicious scent, we’ve got to remember C. x triternata ' Rubromarginata’. This gives huge clouds of delicate starry white flowers edged in a rich velvet purple from July until September. It’s a strong grower, reaching about 15ft in one year and pouring out the most fantastic scent.

Clematis orientalis ' Bill MacKenzie’ and other tangutica varieties flower from early to midsummer. 'Bill MacKenzie’ goes on looking good with lemon-coloured, lemon-peel-textured flowers and then their spidery, puffball seed heads into the late autumn.

It thrives on a north wall and is the ideal plant to train along a fence as it will drape it elegantly for longer than almost any other plant I can think of. It is happy in almost any soil and is easy to grow. This variety seeds freely, but does not come true from seed so it’s important to buy it from a reputable nursery to make sure you get the true vegetatively propagated variety.

Through the winter, you want one of the Clematis cirrhosa varieties, with C. c. var. purpurascens 'Freckles’ and 'Wisley Cream’ getting most votes as the most reliable and free-flowering. They start to bloom in December in a sheltered spot and can flower until March or April. These are evergreen, dormant in summer, but with nodding, bell-shaped flowers at a miserable time of year. They prefer cool roots and flowers in the sun. 'Freckles’ has lovely plum spots over the cream flowers and 'Wisley Cream’ is plain creamy green.

For March and April you want a Clematis armandii variety – which is transformed if you know how to prune it. This was one of Christopher Lloyd’s clematis lessons – cut it right down after flowering. Then you’ll get the lovely almond-like scent of varieties such as C. a. 'Enham Star’ without being drowned out by leathery leaves.

There are also good Clematis alpina varieties, such as the deep blue, free-flowering 'Frances Rivis’, or the almost as good 'Constance’, 'Ruby’ or 'Pamela Jackman’. And you must grow at least one of the multi-petalled, C. macropetalas, such as 'Lagoon’.

Finally, for May, you have the Clematis montanas, ideal for threading up through an apple tree which flowers at the same time. If you’re keen on scent, the delicate, stray white-flowered C. m. var. wilsonii is a wonder, or the more robust-looking and reliable pink, C. m. var. rubens 'Tetrarose’. Once they’re established, the montanas just need the odd hack back.

Thanks to Laurel Emms at RHS Wisley for additional suggestions: