how to sow your own pictorial meadow 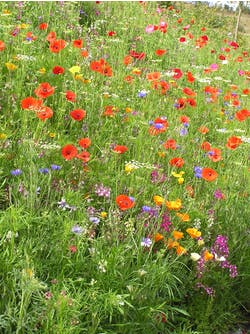 The pictorial meadow is a whole new way to garden and it’s utterly genius.

It’s an adaptation of a cornfield full of annual “weeds”, without the corn, the flowers packed in like an Athena poster. It’s unsophisticated and childlike in one way – cheerful, jolly and abundant – and yet refined at the same time, and working on so many levels; flowery, colourful, long-lasting and the pollinator insects love it.

The pictorial meadow is the invention of Nigel Dunnett, professor of planting design in the landscape department of Sheffield University. I came across Nigel when visiting a demolished factory area in Leeds for my television series, Bees, Butterflies and Blooms on BBC Two.

This was a place full of rubbish and thistles until Nigel’s team went in and transformed it into an urban meadow.

We've created our own pictorial meadows at Perch Hill (albeit on a smaller scale!).

Creating your own pictorial meadow

We broadcast the seed in April in what used to be the fruit garden, but any small or large patch works with this system. Clear the area of plants and weeds then, on a dry day, rake it over and break up any large clods with the back of the rake to create a fine-ish tilth.

I’ve always been a firm believer that annuals in particular need plenty of space to do well, but the pictorial meadow philosophy is the opposite. The sowing density (3g per square metre) is many times what I’d use in my cutting garden, so the plants are practically one on top of another, but amazingly they seem to thrive. Sowing took maybe half an hour for my four 12ft x 20ft beds; we watered with a sprinkler in the spring drought to help with germination, but since then, rain has been regular enough.

Nothing is staked, even though this west-facing garden is one of the most exposed places at Perch Hill. The plants seem to prop each other up, jam-packed in.

At the beginning, we had to weed out a bit of groundsel, and since then, we’ve pulled out lots of prickly sow-thistle – it flowers at the same height as the meadow, so stands a competitive chance, but all the other annual weeds seem to have been smothered. You can tread in quite gingerly to pull sow-thistle out – even with large weeds like this, the flower mix is so densely packed it doesn’t leave any obvious hole.

Exactly eight weeks from sowing the Pastel Annual Mix here at Perch Hill, the first Gypsophila elegans opened, providing an under storey, delicate yet splotchy enough to create a white ripple across the bed. Next came Bishop’s flower (Ammi majus), the best of all annual umbellifers like a more delicate form of cow parsley. Opening at the same height were blue cornflowers, giving the white cloud some weight.

There are corn poppies in the mix too, some classic red, but more in pale pink, salmon and pure white, with plenty of bicolour pinks and whites.

We also added some self-sown opium poppies, fennel, some shoo-fly plant (Nicandra physaloides), the pink and grey Chenopodium giganteum and Bupleurum rotundifolium inherited in the seed beds. I like their slightly more robust appearance mixed in with everything else.

All through flowering, the place gently moves with bees and hoverflies and it’s a magnet for the ever-rarer garden butterflies. Once the meadow has finished flowering, one must resist the tidiness obsession and leave the seed pods for the birds. The skeletons of Ammi and the poppies in particular are a valuable food source for birds, as well as nesting material.

In March or April, you can clear the whole thing up and start again, resowing the same or trying a different mix.

We have several people helping in the garden at Perch Hill and every morning we all seem to be drawn to the pictorial meadow to see what has opened since the previous day. We love it — it’s incredibly easy to do, low maintenance, chock-a-block with shapes and colours and humming consistently with bees. We love the natural feel of it, the simple romanticism and generous optimism of its abundance.

It’s fascinating – both in the broad overview with the mounds and textures which work well, and when you look at it close up too, with so much to see. In a traditional border, you have a front view of your combination and it can be rather one dimensional, whereas with this sort of meadow you can walk around it and see it from all angles, so as the light changes throughout the day, it feels and looks very different.

It looks good today and if it does what it’s meant to, it will go on evolving for many months from now. Pictorial meadows work on every level – a visionary way to garden.

Read more about the importance of wild flower meadows in our gardens ...

Browse our selection of wild flower meadow mixes, or see our wild flower seeds to create your own look.