Fake silk flowers (and a new era of dried and paper flowers) are on the brink of a major comeback, but not in the dusty pub fireplace style that we’re accustomed to. These days, on almost any high street, you can find exquisitely beautiful stems – and even plants – which you can keep for life, not just a few days. And people are buying them: at Marks & Spencer, sales of artificial flowers are up 84 per cent.

I’ve loved cut flowers since I was young, and from the age of seven or eight picked bunches from the garden to bring inside. I find everything about this tradition hugely life-enhancing, but the new generation of artificial, everlasting flowers are also wonderful in themselves, even though this may sound like heresy coming from a dedicated flower grower. 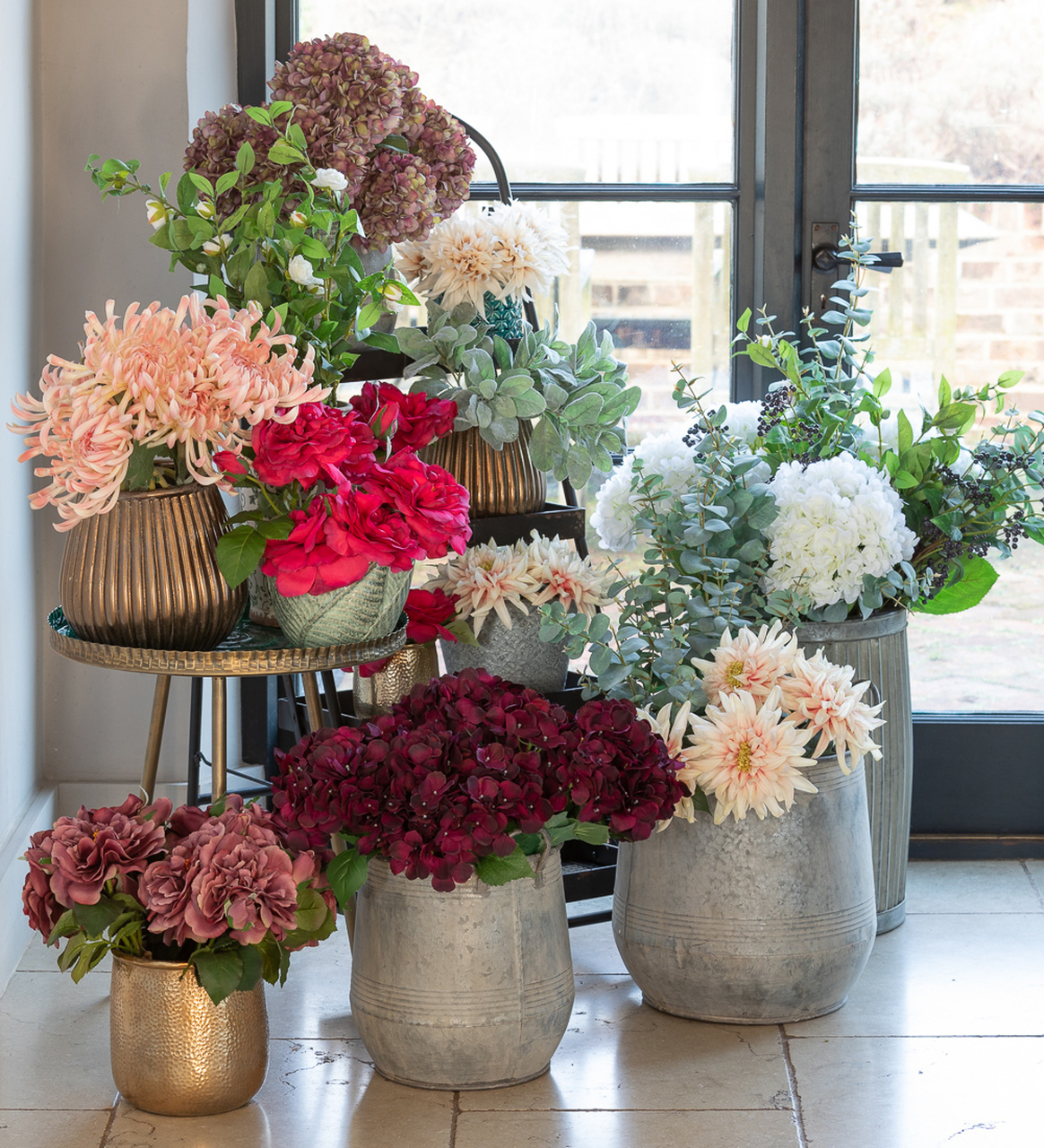 I’m particularly excited about the latest artificial flowers from the Far East, which can amaze you with their sheer convincingness. It’s rather wonderful to have something made from silk and plastic which looks like you’ve just picked it from the garden. They can do wonders for flower arrangements, especially in the gloomy months of the year when we need cheering up.

As with real flowers, it’s good to follow a few rules. First, keep it simple and put together vases of one type – a few stems of guelder rose, some spring blossom, some fritillaries – and if the vase is clear, do add water to complete the trickery. That’s an important subliminal message and it also helps to weight the vase so it won’t topple over.

If you put different flowers together, they look best mixed with foliage. This will balance the too-much, too-good tendency with faux flowers, where they can easily look ostentatious rather than lovely. And when you’re making your selection, go for things from the current season.

This means changing your vases at different times of year. It’s like Christmas; put one lot away as the weather and garden change and take out another. You can give the flower heads a quick blast with a hair dryer to blow away any dust.

For a Mothering Sunday gift I used splashes of acid-green euphorbia, ranunculus and guelder to contrast with one extravagant dark red rose (see front page); or I love pure white spring blossom at this time of year – prunus stems or magnolias with faux silver birch stems.

Magnolias almost always make good fakes. Their leaves and petals have a waxy texture, which is easy to recreate, so look out for flowers with that character. I tend to avoid using artificial versions of highly scented flowers such as hyacinths, sweet peas and lilies, or if I do, I mix in some real ones. Otherwise the instinct to put your nose into the vase for a good sniff would lead to disappointment.

You’ll buy the stems a certain height, but don’t let that put you off cutting them. With commercially grown cut flowers it’s always death to beauty to just unwrap them and plonk them in a vase at their existing stem length. You need to cut some short to create the heart of the arrangement and leave others long to give you a horizon. It’s the same with faux flowers: cut through the plastic with good florist’s scissors then the wire should snap if you bend it a few times (or use wire cutters or the wire-cutting bit of secateurs) and – if they’re going into water – just dab the end with PVA glue to prevent any rust.

Once in the vase at varying heights, bend the stems, heads and leaves into natural angles; don’t leave them in a uniform fan. Create some almost right angles or gentle curves as you’d see in nature, and open out the petals. Prise open some of the flowers.

Then with three or four faux single stems or a full-on mixed arrangement, they’re finished and fixed. Buy a bunch of flowers for Mothering Sunday and it will be in the bin within the week. Buy or arrange any silk, paper or dried flowers, and they’re there to stay.

Look at one of the dried-flower frames created by Dutch artist Judith de Vries, with their colours preserved by UV spray, and see flowers from an ant’s view, a tiny microcosm of the plant world, almost reminiscent of Durer’s painting Patch of Grass. They are innocent windows into nature – completely unaffected, as if it were a photograph made real. Judith grew up in Amsterdam but almost every weekend and holidays she went to the woods where her grandmother lived, and since she was young collected things she found in nature – leaves, flowers and pieces of wood. Her frames are an extension of that, small meadows including tiny plants, mostly weeds, with strange shapes and different colours.

I’ve also come across an American faux-flower artist, New York-based Livia Cetti, whose childhood was spent outdoors in Santa Barbara on the west coast. Livia works in paper, and her stems are more joyful and festive than delicate, but they’re also sophisticated and marvellous. Every stem is about freshness, with a sunny, open playfulness in all her work – like a beautiful American smile.

The colours are very clear; every stem is pert and cheerful. These are not like botanical paintings where the aim is to be meticulously accurate, but more to recreate the atmosphere of a plant. They’re not exact replicas and have never aimed to be. As Livia says: “I’m not trying to copy nature, nor am I interested in copying each and every stamen or leaf of a plant. My process is less about anatomical recreation in a realistic fashion. It is more about capturing, in a stylised way, my memory of the plant’s form and the qualities that I love most.”

These two women make things that aren’t there to pretend to be real flowers – they are playing with the idea you can still catch a moment. You can take something that is inherently transient and hold it. There’s no trickery involved in what they do – you can see their unnaturalness for what it is.