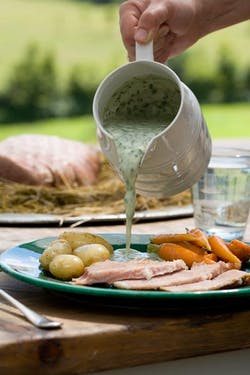 A traditional Luxembourg dish, this is an excellent thing to cook for a party when you're feeding lots of people. The hay keeps the meat really succulent and gives it a distinctive sweet, grassy taste. Serve it simply with new carrots, minty potatoes and plenty of parsley sauce. To give it a bit of zip, I add a chilli and lots of freshly ground black pepper to the sauce. The ham is also delicious cold.

If you like, you can decrease the meat weight suggested and make the recipe to serve 4, using a 1.5kg leg of ham and one bottle of apple juice, but still with plenty of hay.

for the parsley sauce

Soak the ham in water (in the fridge) overnight.

Preheat the oven to 180°C/gas mark 4. Discard the water that the ham has been soaking in. Choose a casserole that snugly fits your ham joint. If you don't have one big enough, use a large saucepan (with a lid), or, as a last resort, a roasting tin tightly covered with foil.

Put the apple juice, bay leaves and peppercorns in the bottom of your casserole. Spread a good base of hay over this and sit the joint on top. Pack more hay all around the ham and right over it. Fill the casserole with more apple juice or water, covering the ham.

Cover and put in the oven for 20-25 minutes per 500g (so about 2 - 2½ hours for the joint size suggested). Check every so often and top up with more apple juice or water if needed. It must not boil dry.

Remove from the oven and allow to rest for 20 minutes before carving.

To make the sauce, put the milk in a pan with the clove-studded onion, peppercorns and bay leaves. Bring to the boil, then strain and put to one side.

In a separate pan, melt the butter and stir or whisk in the flour, allowing it to cook for a couple of minutes. Gradually stir or whisk in the strained hot milk. Add the chillies and parsley, stirring continuously, and cook for 5 minutes over a low heat. Season with salt and lots of black pepper.

This recipe comes from Sarah Raven's Food for Friends and Family.