The recipes in this article first appeared in Country Living in July 2015.

Super-healthy tomatoes are so versatile, you could eat them at every meal in a thousand different ways and never be bored. Raw, they’re a rich source of vitamin A, C and E, as well as the mineral manganese. Commercial greenhouse crops, grown and picked not fully ripe, have been recorded as having one-third the vitamin C of those ripened outside. With health in mind, farmers are now producing ‘designer tomatoes’ in greenhouses that use pink LED lights to intensify flavour and add vitamin C. However, tomatoes are relatively easy to grow at home, plus they’ll taste and be better for you.

High levels of lycopene – the most powerful antioxidant to have been measured in food – gives the deep-red pigment and is also found in watermelon, papaya and rosehip, as well as grapefruit, asparagus, parsley and basil. Cooking actually improves its absorption, with up to three times the amount compared with raw. Lycopene’s anti-cancer benefits have been repeatedly shown, the evidence strongest for prostate, but also linked to a decrease in lung, stomach and breast cancer. In tomatoes, it’s the skin that has the highest concentration, so leave them on and use as much tomato paste, purée and sundried tomatoes as you can in your day-to-day food, as these three provide the most lycopene gram for gram. Always eat tomatoes with a small amount of oil: lycopene is fat-soluble, so it helps to absorb it more efficiently.

Cooked tomatoes are also one of the best healthy-heart foods. Both raw and cooked have been shown to lower total cholesterol, LDL (bad) cholesterol and triglycerides. The phytonutrients – again more active in cooked tomatoes than raw – also combine together to prevent unwanted clumping of platelets and so reducing the risk of clogging of the arteries, as well as contributing to improving the function of the blood vessel walls. Several studies have shown that tomatoes can help lower blood pressure, especially in those where it is already raised.

With tomatoes at their best over the next few weeks and months, plan to feast on them as often as you can – it will do you a power of good.

Squid mixes beautifully with tomatoes, it’s also low in fat and rich in potassium and vitamin E – nutrients that help to protect your heart and keep blood pressure and cholesterol within the normal range.

Heat 1tbsp oil over a medium heat in a large frying pan or hob-proof casserole dish. Add the onion or shallot and cook for 2 minutes. Stir in the garlic and cook for a further 2 minutes until the onion and garlic are slightly softened but not browned.

Add the squid, rosemary and thyme sprigs and cook for about 5 minutes.

Add the tomatoes – if using tinned, half fill the tin with water, give it a swirl and add that to the pan, along with the potatoes and sun-dried tomatoes. Stir and simmer for 20 minutes until the potatoes are cooked. Add a splash of water if it looks too dry. Season with salt and black pepper to taste.

Stir in the olives and 1tbsp olive oil. Leave to stand for 5 minutes. Remove the thyme and rosemary twigs (leaves having fallen off). Serve sprinkled with parsley.

This is one of my favourite soups, good to cook when there is a glut of tomatoes and it freezes very well. For optimal health benefits, eat this with a bowl of steamed broccoli on the side – the florets are delicious dipped in the warm soup instead of bread.

Coarsely chop the tomatoes (don’t skin them), fennel and onions, and put them in a large roasting dish. Season with salt and freshly ground black pepper, toss with 2 tbsp oil and roast for 30-40 minutes until slightly browning at the edges.

Meanwhile, heat a little more olive oil in a saucepan and cook the garlic, sun-dried tomatoes, ginger and chilli for 3-4 minutes.

Add the tomato juice and coconut milk, and cook for a few more minutes. Cover, remove from the heat and allow the flavours to infuse for 10 minutes.

Stir in the roasted tomatoes, fennel and onions, followed by the dill, fish sauce, soy sauce, lime zest and juice. Season, then cover and simmer for 10 minutes.

Blend in a food processor and serve garnished with sliced sun-dried tomatoes and coriander. This soup is best eaten warm, but you can also serve it cold.

In this traditional recipe from Ischia, off the coast of Naples, the pasta is mainly cooked in the juices of the tomatoes and shellfish, rather than its own pan of water, which is the key to the intensity of its flavour. Shellfish is high in heart- and brain-friendly omega-3 fatty acids.

Add the linguine to boiling water and cook for 2 minutes. Drain and reserve the cooking water.

Heat the oil in a large frying pan, add the garlic and cook gently for 2 minutes.

Stir in the squid and prawns, and cook for 2 minutes.

Add the pasta and cook for 3 minutes, stirring regularly.

Add the tomatoes, mussels, clams, white wine and a couple of tablespoons of the reserved pasta water, stirring gently, and cook for a further 5-6 minutes. Taste and season with flaky salt and freshly ground black pepper. Serve immediately scattered with the parsley. 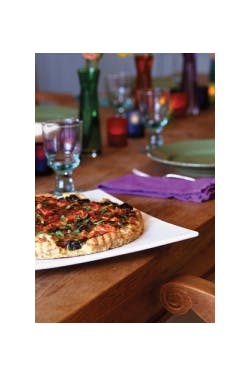 A delicious summer tart with extra nuttiness and nutrition from the poppy seeds in the pastry. They are a good source of minerals as well as the important healthy fats and omega-6s.

Meanwhile, make the pastry. Sift the flour and ½ tsp salt into a bowl, add the toasted poppy seeds and sugar, then rub in the butter by hand until the mixture resembles breadcrumbs. Alternatively, pulse all the ingredients in a food processor. Add enough milk to bring the pastry together into a ball. Wrap in clingfilm and chill in the fridge for an hour or so.

Line a 28cm loose-bottomed tart tin with the pastry, leaving the excess draped over the sides in case it shrinks. Prick the bottom of the pastry case with a fork, line with greaseproof paper or foil and weigh this down with baking beans or rice.

Meanwhile, sweat the onion in the oil until softened. Add the tomatoes, honey and red wine vinegar. Let the mixture bubble away until thick and reduced.

Spread the goat’s cheese over the pastry case, scatter with basil leaves and cover with the thickened tomato mixture. Bake for 25 minutes. Serve warm with a crispy green salad.