The recipes in this article first appeared in Country Living in April 2015.

It’s the greenness of a salad that’s good for you – that, and the water and the cellulose in the leaves, and the roughness of the uncooked fibres. Eating salad feeds the body with undiluted mineral and physical goodness, almost entirely because the leaves have gone nowhere near a stove. Cooking weakens the fibres and breaks down some of the vitamins and the detoxifying chlorophyll, so no (or minimal) cooking is the best idea to make the most of its nutritional benefits.

A couple of years ago, I ate only raw food for a month, which, even for that short length of time without hot food, was a challenge. But simply eating a good leaf salad every day isn’t a hardship. A lettuce-based salad contains vitamins A, C and K, along with lots of dietary fibre and minerals, particularly iron. It’s the red and dark-green loose-leaf lettuce varieties that are the most nutritious, followed by crunchy Romaine (or cos). As a whole, lettuces have only 14 calories per 100g and famously consist of almost 95% water, but it’s worth knowing that cos has almost twice the amount of protein of an iceberg, twice the calcium, iron and vitamin C, four times the vitamin K and 17 times the vitamin A. It’s an extraordinary comparison, so think again when you reach for that crunchy, but almost tasteless iceberg.

Intense flavour is usually a sign that food is good for you. Strong-tasting rocket, watercress and the mustards and mizunas are all super-nutritious salad additions. These brassica-related leaves contain abundant amounts of glucosinolates (the bioactive phytochemicals that make broccoli so beneficial), which are activated by chewing, releasing the distinctive peppery taste.

A handful of watercress (about 50g) stimulates antioxidant, anti-cancer enzymes. It contains as much vitamin C as your average orange; four times the beta-carotene and 15 times the vitamin A of an apple; more vitamin E than the same weight of broccoli; the same amount of calcium as a glass of semi-skimmed milk; and similar levels of iron to spinach. It’s hard to beat in terms of nutrition.

So what makes a good salad? My basic rule is to include at least one thing from five different categories of ingredients. The first is lettuce to give a gentle flavour, crunch (which is particularly important in a summer salad) and background bulk to your bowl. Next come the salad leaves to provide strong taste and splashes of colour. The third addition is herbs, just a sprinkling, coarsely chopped or torn, to give a lovely hit of flavour. Then introduce one or two different salad vegetables to give substance and, finally, edible flowers for prettiness and colour. If you add other ingredients, such as celery, cherry tomatoes and cucumber, choose organic versions or grow your own because, like lettuce and spinach, they have the highest levels of pesticide residue.

Try to include a salad in at least one of your daily meals, and it doesn’t just have to be lunch or dinner – I love gazpacho, salad as soup, for breakfast – and you’ll be all the better for it.

These prawn and lettuce parcels are inspired by a dish at a fantastic health retreat, Kamalaya, on the island of Koh Samui in Thailand, where they use betel leaves instead of lettuce for the parcel. Choose a lettuce leaf as your mini plate, and spoon in small amounts of any ingredient you fancy. Top it with a teaspoon of dressing, wrap and eat. You can also serve this with beaten-out-thin chicken, beef or seared salmon as a main course.

Serves 8 as a starter or mezze

Remove the tough outer leaves of the lemongrass, then finely chop. Put all the dressing ingredients into a food processor and blitz. Pour into a small pan set over a medium heat, then cook for about 5 minutes until reduced by a third and turning syrupy.

Put the sliced shallots into a bowl with the lime juice and leave to marinate. Drain before using.

Using a vegetable peeler, shred the fresh coconut into thin strips and dry fry until just starting to brown.

Heat the olive oil in a frying pan. Add the prawns and cook for 2-3 minutes until pink.

Put the parcel ingredients into individual serving bowls: lettuce leaves, coconut, prawns, shallots, peanuts, mango, coriander, sesame and poppy seeds (mixed together) and the dressing. Arrange the bowls on a tray and serve.

Green spring herbs and spinach have a similar nutritional profile to salads, and are also best eaten raw or wilted gently, as in this recipe. You can use ready-made filo pastry, which gives a crunchy texture like a water biscuit, or make a more substantial wholemeal pastry. I love both served as meze at a party or a starter for lunch or dinner. To reduce the calories, I omit the cheese and increase the herbs and vegetables by about 50 per cent.

To make the wholemeal pastry, put all the ingredients into a bowl and mix with a fork, then your fingers, to form a dough. Shape into a ball and leave to rest for 30 minutes.

To make the filling, blanch the spinach and drain. When cool enough to handle, squeeze out as much water as possible, then finely chop and put into a large mixing bowl.

Heat the oil in a large pan, add the fennel, leek and garlic, and cook for 5 minutes, stirring.

Add this and the remaining filling ingredients, except the coconut oil, to the spinach and mix well. Season with salt and freshly ground black pepper.

Cut the wholemeal dough into 10 equal-sized pieces. On a floured surface, roll out two circles of dough to 22cm diameter and 1-2mm thick.

Heat a little coconut oil in a frying pan and put in one piece of the dough. Spoon over a fifth of the filling mix and spread out evenly. Fry for 3-4 minutes over a low heat.

In a separate pan, heat a little coconut oil and add another piece of rolled-out dough, fry for 3 minutes on each side or until golden brown, and place on top of the open mixture on the pie in the other pan.

Repeat the process for the remaining four pies. They can be kept warm in the oven until ready to serve. 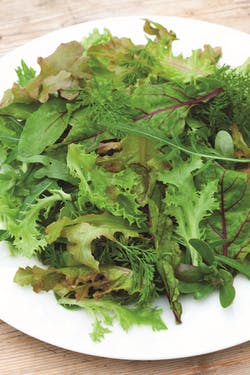 This deserves to be a course in itself. It’s a delicious, good-looking bowl, which even the most greens-wary child or meat addict will find hard to resist. Choose one of the two dressings to finish.

For the mint and lemon dressing

For the tarragon dressing

Wash and dry the lettuce and tear up any large leaves into a generously sized salad bowl, followed by the salad leaves. Coarsely chop the herbs and add to the bowl.

Using a mandolin or very sharp knife, cut the vegetables into wafer-thin slices – this will ensure they are scattered all the way through and you’ll get a taste with almost every bite.

To make the dressing, put the oil into a small bowl with a pinch of flaky salt and freshly ground black pepper. Stir in the lemon juice and zest (or tarragon vinegar) and add the herbs (parsley, chives and coriander are also good), honey and mustard. Whisk well to combine.

Dress the salad and toss well – your hands are best for this – to give a light, even coating of dressing over every leaf. Scatter with edible flowers and toasted seeds, and serve.

I love a glass or bowl of this for breakfast, or for a mid-morning or afternoon snack. It’s peppery, iron-rich and refreshingly sweet. It also makes a delicious starter for lunch or dinner.

For the oatcakes (makes 20)

First make the oatcakes. Put the butter (or coconut oil) into a saucepan with 4 tbsp water and set over a medium heat.

Place the oats in a blender and blast until mostly ground down.

Tip the oats and all the seeds into the saucepan with a pinch of salt and stir. Add more water if needed to make a tacky dough. Leave to cool, covered, for half an hour.

Dust the work surface with oats and pat out the dough gently with your hands to flatten and shape until it is around 5mm thick. Cut out circles using a 5cm cookie cutter or the top of a mug.

Arrange on the baking tray and bake in the oven for 20 minutes, turning over halfway through. Allow to cool completely before eating. Store in an airtight tin or jar.

Put the gazpacho ingredients into a food processor and blitz until smooth. Season to taste Serve each glass – or bowl – with 2-3 oatcakes on the side.