how to create a delicious organic salad

edible flower varieties An organic salad grower taught me how to construct the perfect salad 10 years ago, and I have been following the same rules ever since. This generic recipe turns a salad into something that deserves to be a course in itself, rather than a side dish, and does not require fish, meat or cheese to make it delicious.

The basic rule is to have at least one thing from five different categories of ingredients. The first posse from which you select are the lettuces. These give gentle flavour and sometimes crunch (particularly important in a summer salad), and the background bulk.

Next come the salad leaves, the cut-and-come-again things to provide the strong flavours and often good splashes of colour. This includes the rockets, mizunas, mustards and cresses, of which there is an ever-expanding range (more of which later).

The third addition is one of the salad herbs — sorrel, lovage, basil, parsley, coriander, sweet cicely, leaf fennel, chervil or mint. You only want a sprinkling of these, coarsely chopped or torn, but they give a lovely hit of flavour.

Then you may want to add one or two different salad vegetables: some radish, bulb fennel, fresh peas or pea tips. The key to mixing these into your salad is to keep their weight as light as possible so they don’t just sink to the bottom. Use a very sharp knife or, for bigger things, a mandolin. Wafer thin, the fennel, radish and even cucumber or celery will remain scattered all through the bowl, and you will get a taste with almost every bite.

The final group from which to select is an edible flower: a pansy or viola, primrose or the petals of a marigold, rose, nasturtium or dahlia. Then you are guaranteed a tasty, good-looking bowl, which even the most greens-wary child or meat addict will find irresistible.

Turn over a new leaf

New salad varieties emerge from breeding programmes and other parts of the world all the time .I’m always eager to try them, so I have just been to the trials of one of the largest salad breeders and seed importers in this country. We selected a perfect summer salad that can be sown now — with one element at least from each of the five categories. We also put together a hardier, autumn-to-spring choice, which, if sown this September, would keep going until this time next year.

For the summer bowl, I would start with lettuce 'Saladin’, wonderfully sweet in taste and crunchy in texture. It is hard to find better, and we have recently trialled this at Perch Hill, picking it as an individual leaf rather than a one-off, hearting type, and it produced well. 'Reine de Glace’ is a brilliant alternative.

There was plenty to choose from for the salad leaf, and we picked four. The first was the brilliant acid-green, gently cabbagey-flavoured 'Golden Yellow Pak Choi’, along with a red pak choi for its richness of colour. I also loved the elegant mustard 'Red Dragon’, with its serrated leaves and strong crimson veining, which looks and tastes so good, as well as 'Green Fire’ (an improved 'Green Frills’ type), a strong and delicious leaf which punches well above its weight. All four thrive in the bright light and heat of summer, but will need the odd bout of watering to keep them at their best. Sow little and often.

For a tangy summer herb, we added bronze fennel, picked very young and tender – just a small bunch so its strong flavour did not overwhelm all the others – and then we added a salad turnip. A new discovery for me, I loved this round, white root, which looked like a radish but had a sweet turnip flavour. It went straight to the top of my sowing list for next week.

For colour scattered over the top, I used the Viola 'Papilio’, in mauve and cream, which does not taste of much, but lifts the look to another level.

Moving on to the selection for sowing in a few months’ time for colder-month salads, I’d go for 'Green Salad Bowl’, 'Black-seeded Simpson’ or a red cos lettuce for the base. They have all survived the winter at Perch Hill inside and out, despite the harsh weather. Into that goes komatsuna. This is an underused leaf: much easier to grow than baby-leaf spinach, but similar in texture and taste. You can sow and grow this now, but it is also hardy enough to grow well — particularly under glass — from autumn until spring. Again, this is a new must-have for me.

We also added one of the new salad rockets, 'Serrata’. This has a thicker leaf and the mild flavour lasts for longer than many salad rockets. I have become bored of salad rockets that quickly bolt and become too strong to make nice eating, so I am keen to try this one in the autumn.

We put a new green mizuna ('Marshall’) into the winter bowl too, again with a thicker leaf to give it more crunch and a more widely serrated shape, and so with more substance.

'Red Lace’ mustard went in too, with rich-coloured leaves, a mix of red and purple, and a mild mustardy flavour; and 'Blue Curled’ kale, very tender with a good, gentle cabbagey taste. I tore up a little flat-leaf parsley over the top, and sliced a pretty, purple-pink skinned, white fleshed radish 'Caro’.

The final touch was a mix of Primlet Series primulas. This is a magnificent new spring container plant with edible flowers (Gardening April 6). Here is yet another use for them — to dress up your salads like a multicoloured natural confetti, until the petals of roses and nasturtiums can take over.

At Sarah Raven we sell Sarah's favourite salad seed and herb & edible flower varieties for you to grow at home, please browse through our seeds and plants to discover growing information and recipe ideas.

This article first featured in The Daily Telegraph in April 2013. 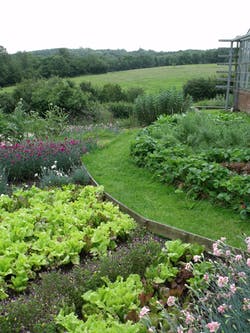