sowing biennials for next year 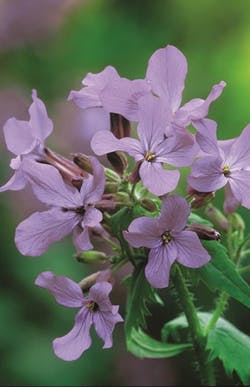 July is the time to sow your biennial flowers for wonderful displays in your garden next year.

Common-or-garden honesty is one of my favourite plants. It is an easy biennial to grow, will gently self-sow but not invade, and it thrives almost anywhere - in the sun or even in the shade of a hedge. It has a faint scent and gives a great splash of colour when there isn't much around.

This spring, I used the purple variety as a brilliant coloured backdrop to my corridor of wallflower plants and tulips down the central path in the cutting garden. I also plant it in drifts among and around the early-emerging crimson foliage of Lysimachia 'Beaujolais' and the spring-flowering euphorbias, E. characias subsp. wulfenii 'John Tomlinson' and E. palustris. Put a few 'Orange Emperor'and highly scented 'Ballerina' tulips in among them, in pots or in the ground, and you'll have a magnificent colour razzmatazz which lasts for months.

Honesty is also excellent for picking, lasting at least a week in water. I cut lots of both the white honesty and purple to arrange with tulips and narcissi, cerinthe and euphorbia almost every week in spring. It's the one plant that gives you abundant clouds of flowers, great frothy vases early in the year, and it is cut-and-come-again. If you keep picking it - not right to the ground, but to immediately above a leaf or side shoot - a new stem will grow and flower again.

Once the flowers are over, that's not the end. All through June, I pick fresh seed pods to arrange. The mauve-flowered Lunaria annua 'Purple' has a lovely purple wash over the coins, while those of the white-flowered L. var. albiflora are pure, bright green. Strip all or most of the leaves - they look messy by this time of year - and put five or 10 stems in a jug or vase either on their own or used as an architectural foliage filler with peonies, Ammi majus or other June flowers.

Now, in July, pick the whole lot, cutting the plants to the ground to bring inside. I hang them upside down in an airy room to dry and then, near Christmas, take them down to make decorations. Each medallion seed pod is sprayed silver and then threaded on to lengths of crimson or purple ribbon. These can be strung across the room like paper chains or added to the tree in a cascade from top to bottom.

If you like the idea of these home-grown decorations, don't leave all your honesty out in the garden to be pulverised by wind and rain. They will last better, with both sides of the pod intact, if you bring them in soon.

So that's at least three uses for honesty -and all for the cost of a packet of seed. And, as honesty is biennial, now is sowing time. I've just sown one packet of the purple (quite a few of these have already self-seeded) and two packets of white. I've scattered the seeds (well spaced) into a vast seed tray filled with compost. You don't need seed compost as they won't be in the tray for long.

They will germinate in about 10 days and I'll prick them out a couple of weeks after that. If you've spaced the seed widely, this is easy to do; given enough room between each one you can plant them out into the garden straight from the seed tray.

Biennials flower not this year, but next. They are best planted outside in the late summer and autumn so they can get their roots well established over the winter before they have to perform.

Other biennials to sow now

Wallflowers (erysimum) germinate more quickly than honesty. They can also be sown inside, but are fine sown direct into a seed bed in the garden if you have room. I always sow the single-colour, highly scented varieties, Erysimum cheiri 'Blood Red', Erysimum 'Fire King' and Erysimum 'Vulcan'. There is a lovely Giant Series, which will grow happily in shade. Erysimum 'Ivory Giant' grows in crevices in the walls at Sissinghurst. They look magnificent cascading down over the red brick and flower from March to early June. This one has a wonderful scent too unlike a lot of the giant series and they make brilliant, tall garden plants and fillers for a vase. If you sear the stem end in boiling water for 30 seconds, and put a splash of bleach or vinegar in their water, they last a week.

Wherever you sow wallflowers, inside or out, it's worth remembering that they are brassicas and at this time of year may come under a siege of flea beetles - little shiny beetles that hop like fleas. These will pepper your newly emerged seedling leaves with holes, which won't kill the plant but will slow its growth. To prevent this, cover them with fleece or Enviromesh until the middle of August, when the flea beetle disappears.

Anchusa (alkanet Dropmore) is a beautiful deep blue flower on tall, airy plants. These flower from mid-May to mid-July and the flowers are edible. Use them scattered over salad, or frozen in an ice cube for cold drinks and soups.

Sweet william comes in various mixed colours, but there are four lovely individual varieties of Dianthus barbatus worth growing. Dianthus barbatus 'Nigricans' is a single colour crimson-black with lovely dark foliage. This flowers at the same time as the hardy annual Calendula officinalis 'Indian Prince' and they look wonderful together. Dianthus barbatus 'Oeschberg' is a brilliant magenta with crimson foliage and I also love Dianthus 'Auricula eyed mixed' a jolly bundle of colours which define the start of summer.

Sweet rocket (Hesperis matronalis)comes in a mauve or a white form (var. albiflora), has a lovely spicy scent, and will grow in full sun or partial shade. This will need staking as it grows to 3ft tall.

Iceland poppies in cream, white, primrose yellow and apricot (Papaver nudicaule 'Party Fun') are highly scented and one of my favourite cut flowers. If picked in tight bud they will gradually unfurl. Sear the stem end in boiling water for 20 seconds and they'll last five or six days.