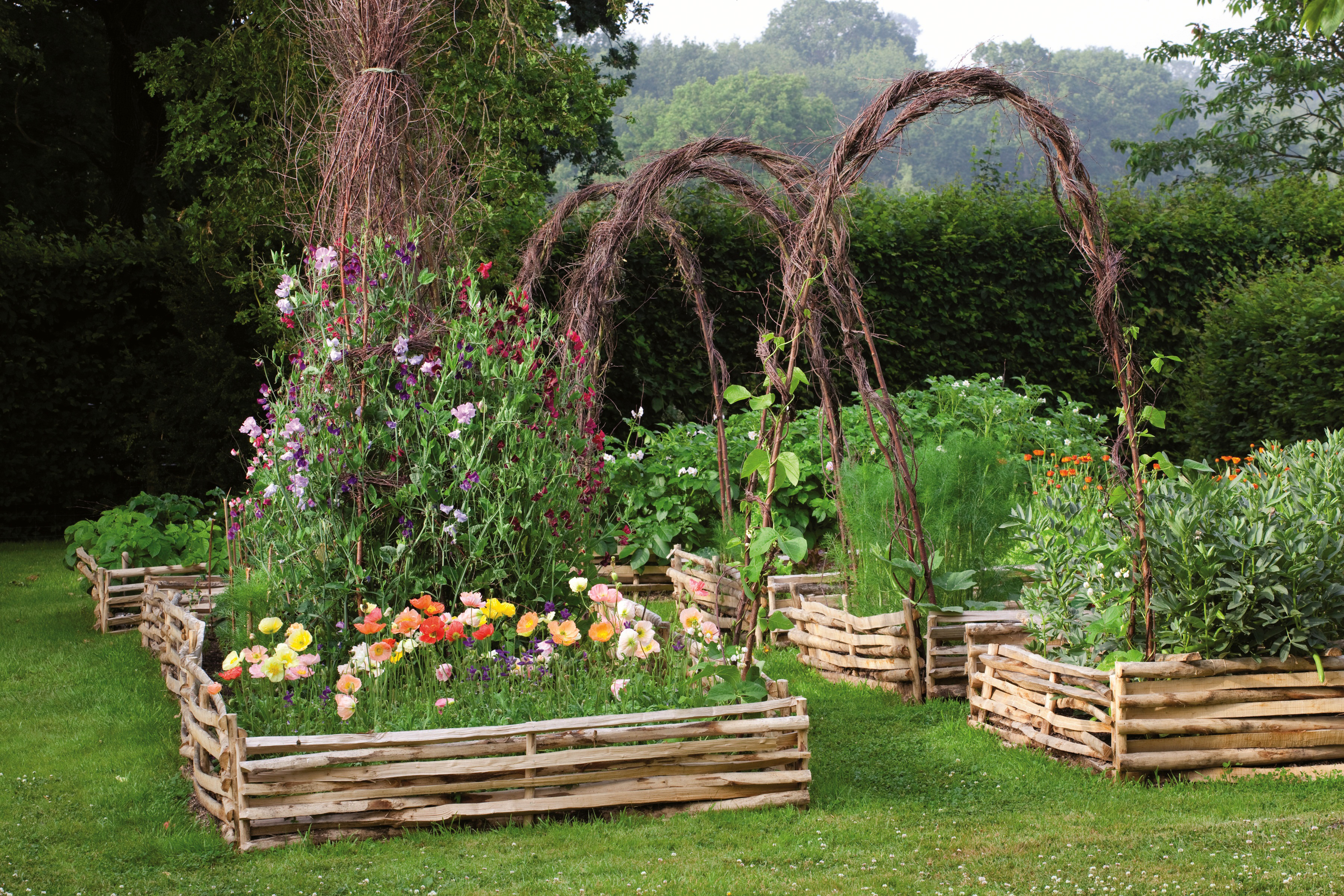 In 2012 I had a resolution for my new vegetable patch - to use only British native wood for plant supports and edging. I needed to raise the beds to help drainage on our heavy clay soil.

If I did this without creating an edge, soil would pour out over the grass paths whenever I water, whereas containing the higher level allows me to add lots of organic matter (municipal waste compost) and plenty of grit (¼in pea shingle) to break up the clods.

Food production will be more efficient for it. I also want plenty of arches and frames to give my patch an elegant presence and provide support for climbing plants.

It's important to make the most of the room you have by using air, as well as ground space - without, I hope, throwing too much shade. Even in this quite small space I'm putting in two teepees and four arches over the main path, as well as supports for tomatoes, peas and beans in my legume bed.

The raised bed edging could, of course, be made from oak (too expensive), or planks of treated timber and all the climbing frames could be constructed from bamboo canes, string and plastic netting, but the job looks a hundred times nicer made from native silver birch, hazel or chestnut. I'm not including willow as it tends to root. You can remove the bark of the soil-inserted section to prevent it coming alive, but on my heavy soil it's still risky.

For the edging to my beds I have used an adaptation of traditional sheep hurdles made from chestnut, which last a good eight to 10 years, even with sections in the damp ground.

Sheep hurdles are usually taller and longer than my raised bed edges, but are also made in Kent using the same techniques of stripping and then splitting and weaving the chestnut stakes. Depending on branch size these are halved, quartered or eighthed into the right size. They're robust, chunky and absolutely perfect for the job.

For the pea and bean supports I've used mainly silver birch, supplemented with hazel. Hazel is coppiced a little in Sussex and Kent, and much more in Hampshire, Surrey and West Sussex where it is now quite widely available. Silver birch is a weed wood - the first thing to colonise open ground and people are generally dismissive of it.

It makes only half-good firewood and rots quickly, so is not much use for fencing, but it has long been harvested for brushwood fences for horse racing, which has kept the tradition of coppicing going in a small way over the past 20 years. Recently, gardeners have become keener on it, so it is slowly becoming more available.

So birch is what the teepees and arches for my whole patch are made from. The teepees are constructed from six 7ft branches, sunk in the ground to a depth of 6in and then tied at the top with twine.

In three levels, I've then gathered up the side branches and twisted them horizontally, moving around from one pole to the next, weaving and twisting as I go. I've finished them off and bound the ends with Flexi-Tie.

The arches are constructed in a similar way from two pairs of 9-10ft silver birch poles (four altogether), two made into an arch over the path and then each one woven into another two standing at their side to increase the strength of the whole.

As they are covered all the way up with twiggy branches, silver birch or hazel are more efficient for staking than netting or bamboo.

This needs to be clad in twine to make an effective climbing frame. Think, too, of the end of the season. If your home-made frames won't last another year, they can go on the bonfire, not into landfill.

Using native wood is much greener than importing materials from Finland or the tropics, but there's more to it than that. It helps my patch sit well in its wooded landscape and, by encouraging wood harvest, it's helping to bring derelict tranches of coppiced wood back into production.

This will encourage a renaissance of wild flowers. If woods are unused, they become so congested that the floor gets little light and wild flower seeds and corms remain dormant or die.

As soon as you coppice and allow more light and the sun's warmth to penetrate to soil level, you catalyse the germination of many wild flowers - wood anemones, primroses, celandine, violets, campions, foxgloves and rosebay willow herb. You'll see this flowering a year after a wood has been newly cut.

Bluebells and garlic and, to a lesser extent, wood anemones need lower light levels to germinate and thrive and so non-coppicing favours these but, with regular harvesting, the woods will again become a succession of colour.

Over the past five or six decades, oil has replaced wood for heating, wire has taken over from chestnut fencing and we've seen the decline of the mixed farm and the virtual death of hop growing (so almost no demand for hop poles), all of which has led to the countrywide neglect of our coppiced woods.

This is a terrible loss, so - as much as we can - let's banish imported bamboo canes, plastic and chemically preserved pine from our gardens and revert to our own native wood harvest so that more and more of us can enjoy a flowery, wooded spring.