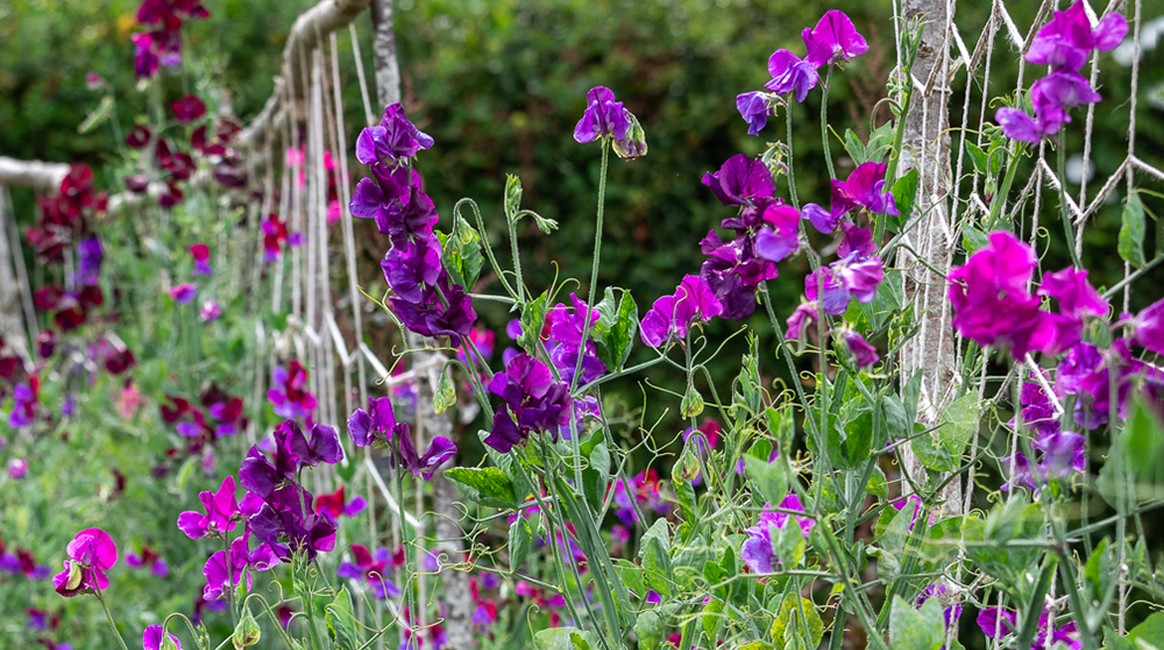 It's a fascinating story – how we got from that small, highly scented climber to where we are now.

The Sicilian monk, Franciscus Cupani, was writing a Flora of Sicily and in 1699 sent seed of Lathyrus odoratus to various institutions and plant collectors.

Some came to Britain to a man called Dr Robert Uvedale, of Enfield, in Middlesex. From then until 1870 a few new forms appeared – in 1793 the seedsman John Mason, of Fleet Street in London described five varieties in all; a black-flowered form (probably maroon), purple (probably the ' Cupani' wild type), a scarlet, a white and 'Painted Lady', which remains one of the very best and most highly scented sweet peas you can grow today.

Then appeared Henry Eckford, the creator of many sweet peas we grow. He worked as a gardener until 1888 when, aged 65, he set up his own nursery at Wem, in Shropshire, and dedicated the rest of his life to improving and expanding the small band of sweet peas then available.

Eckford achieved two things - greatly increased flower size and an expanded range of colours. The result of his work is the Grandiflora group of sweet peas which, until this year, formed 90 per cent of the varieties I grow. They have what are now considered to be relatively small flowers and short stems with three, sometimes four flowers to a stem, but many of them are irresistible, with wonderful, strong scent and great dignity and elegance.

My current favourite is the brilliant, zingy, bicolour, ' Prince Edward of York', a highly scented magenta and fuchsia-pink form. I can't think of anything lovelier than a bunch of these in a glass beside my bed, mixed with 'Matucana', an improved, slightly larger-flowered form of 'Cupani'.

That's not it among great Grandifloras. I'd also be bereft without ' Black Knight' (crimson), 'Lord Nelson' (navy), 'Violet Queen' (bright mauve-purple) and 'Annie Gilroy' (brilliant cerise-pink). And, after a visit to Seedlynx, an incredible library of sweet peas growing near Maldon in Essex, I would have to add the weird, but still beautiful raspberry ripple, 'Queen of the Isles'.

After Eckford, the baton of sweet pea breeding was taken up by Silas Cole, a gardener working for the Spencer family (of Diana, Princess of Wales fame).

Cole grew and loved lots of Henry Eckford's varieties and, in 1900, was triumphant when one of his plants threw up a sort with even bigger flowers and a wavy petal edge. It was bright pink, huge and luscious; Cole named it 'Countess Spencer'. He exhibited the variety at the National Sweet Pea Society's first show, at the Royal Aquarium in 1901.

The same frilly form was found the same year by William Unwin, a grower of sweet peas to use as cut flowers for Covent Garden market. This flower became the basis of Unwin's Seed Company. Unwin named his variety 'Gladys Unwin', and it proved more stable than Cole's 'Countess Spencer'. Eckford also released a frilly form as 'Countess Spencer Improved'.

Everyone went mad for this frilly, flamboyant, scented flower and lots of work went into expanding the range of so-called Spencer types so that they gradually became available in almost every colour but yellow. There are many varieties that we still grow.

They are popular for the show bench, but, on the whole, I'd say they are not as lovely as the Grandifloras. They're almost too much of a good thing, moving from dignified flower into frilly tennis knickers at the more flamboyant end.

I grew a few that excelled in our Perch Hill sweet pea trials. ' Anniversary' (which seems to flower for almost twice as long as others, often pickable well into the autumn from an early spring sowing), the deep maroon 'Charlie', rich pink 'Barry Dare', 'Winston Churchill' (a dark crimson) and the most impressive sweet pea I've ever grown, the purple 'Su Pollard', with scented flowers as showy as bougainvillea.

a ripple of interest

When the hybridists felt they'd cracked the plain colours, they moved on to "stripes" and "flakes". William Unwin and later his son Charles bred lots of these.

A stripe has a so-called "picotée edge" (a darker colour to the rest of the petal) with stripes only on one side of the petal. A flake has no picotée edge, with the same flaky colouring on both sides of each petal. These were all the rage in the twenties and thirties and are having a big revival now, varieties such as 'Wiltshire Ripple', 'Blue Ripple' and the almost-black, 'Nimbus'.

In the past few decades, there have been more sweet pea developments – dwarf varieties for containers, middle-sized climbers to make hedges, early ones that sown in August will flower in early spring, and late ones that if sown in July will flower at Christmas.

The most recent breeding success has to be the incredible 'Modern Grandifloras' with all the royal cards in their hand. These have been developed for large flowers and lots of them, with long stems of the Spencer types, and the bonus of fantastic scent from 'Cupani' and its early brigade.

It was these that I fell in love with at Seedlynx's sweet pea collection. How can you resist ' Almost Black', an incredibly glamorous and highly scented thing, or brighter crimson-red 'Scarlett'? As I walked down the lines on show, I also fell for 'Heathcliffe', a bright mauve-purple. I seemed to be scribbling almost every name in my notebook.

If you like flowers on the edge of strange, there are more new varieties in this showy and scented group worth keeping an eye out for. Look at 'Fire and Ice', a faint hint of mauve and pink on cream and the occasional pronounced deep purple stripe, or the brilliantly named 'April in Paris', cream with a distinct purple eye-liner and picotée edge.

Here, at last, are incredible modern varieties that smell as strong as the classics. I'll be growing lots of these at Perch Hill.