The recipes in this article first appeared in Country Living in May 2015.

As a nation, we’re devoted to potatoes, eaten every which way. But why not use more of the healthy, coral-orange sweet potato? I make a dish similar to dauphinoise potatoes, with sweet potato, coconut, ginger and lime, which has the same comforting texture, yet a much greater nutritional value. The same is true of soup: swap cream-laden vichyssoise for my super-healthy, saffron-coloured sweet potato, carrot and peanut butter recipe. It’s one of my favourites.

The sweet potato is a great source of fibre and vitamins, particularly C and B6. Also, like carrots, the orange fleshed varieties are packed with an orange pigment called beta-carotene (in the family of carotenoids). The deeper the orange, the greater the density of the pigments; sweet potatoes have the highest level, followed by carrots, and other orange and yellow fruit and vegetables, such as squash, melon, peppers and apricots. Surprisingly, the dark, leafy greens kale and spinach also have high concentrations.

Beta-carotene aids night-time vision, is anti-inflammatory and appears to help the immune system. However, most importantly, diets rich in carotenoid-dense foods (beta-carotene included) can help to prevent cancer. A large study at Harvard University showed a 32 percent reduction in the risk of lung cancer in those who consumed more carotenoid-rich foods as part of their regular diet, compared with those who ate less. Another study of women (conducted by Women’s Healthy Eating and Living), who had completed treatment for early-stage breast cancer, found that those with the highest blood concentrations of carotenoids (from a diet generally high in these fruit and vegetables) had the least likelihood of cancer recurrence.

Sweet potato is a carbohydrate-rich food that releases its natural sugars slowly into the bloodstream (particularly helpful to anyone with type 2 diabetes), whereas a white bread sandwich or standard baked potato causes a rapid sugar spike in our blood (owing to their high glycaemic index, or GI). When boiled or steamed, sweet potatoes have a reasonably low GI of 46, compared to 82 if they are roasted and 94 if they’re baked. White bread has a GI of 70; normal jacket potatoes of 69 with skin, or 98 with no skin, so steamed sweet potatoes are slow in their sugar release by comparison. Incidentally, carotenoids are a fat-soluble vitamin, so always eat them with a little fat, such as olive oil or coconut milk, or combine them with nuts to aid absorption. If you buy organic varieties, you can eat the flesh and skin; otherwise peel before eating, as the skin may have been treated with dye or wax. Then drop them into a bowl of water to prevent the flesh oxidising in the air.

Native to Central and South America, sweet potatoes aren’t frost-hardy and need a long growing season with plenty of light, so they are probably a vegetable to buy rather than grow. It’s now, in mid spring, when fresh, local, seasonal vegetables are hard to find, that they should rise to the top of the shopping list.

Enjoy this with a green salad or serve alongside sea bass or salmon and a salsa verde or ginger, chilli and coriander sauce. If eating as a main dish, top with pomegranate seeds for extra crunch and goodness.

Peel and cut the sweet potatoes into 1-2cm rounds and put in a large bowl.

Peel the ginger with a teaspoon. Finely chop it, with the chilli and garlic – I do this in a food processor. Add the coconut milk, lime juice and zest, honey or maple syrup (if using) and blitz briefly.

Pour over and mix well with the sweet potatoes – your hands are best for this. If making double or triple quantities, increase the coconut milk, lime, honey, garlic, ginger and chilli by only 50% to the proportions of the sweet potato, otherwise the dish turns into a soup. Season with flaky salt and freshly ground black pepper.

Transfer the mixture to a 21cm x 28cm casserole or baking dish. Cover with a lid or foil and bake for 1 hour until the potatoes are tender. Uncover and bake for an additional 15-20 minutes until the top is browned. Scatter with pomegranate seeds (if using).

Health credentials aside, this is one of my favourite fragrant soups, with a strong taste of peanut butter. The ginger cuts through the richness of the nuts and sweet potato.

For the peanut butter (makes 500ml)

First make the peanut butter. Heat the oven to 180°C (160°C fan oven) / gas mark 4. Put the peanuts in a single layer on a baking tray and roast in the oven for 20 minutes until golden brown. Leave to cool.

Put the peanuts into a food processor and blitz for about 5 minutes for a crunchy version or longer for a smooth one.

Heat the olive oil over a medium heat in a heavy-based pan. Add the onion, garlic, chilli, lemongrass and ginger, and sauté until the onion is soft.

Add the sweet potato, carrots and stock, and bring to the boil. Turn down the heat and simmer gently for 10-15 minutes until the sweet potato is soft. The carrots will be a little firmer.

Allow to cool slightly, pour into a food processor and blitz for 10 seconds, keeping texture to the vegetables.

Pour the soup into a large pan, adding the coconut milk and peanut butter. Stir over a medium heat but don’t boil. Season to taste.

Ladle the soup into bowls and serve with the fresh coriander, roasted peanuts and lime wedges in separate dishes. 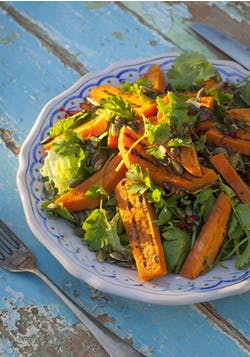 In this recipe, sweet potato slices are steamed and briefly griddled, which is better for your blood sugar levels than roasting. They are then dressed in a little olive oil and served on a bed of punchy-tasting, colourful leaves.

Peel and cut the sweet potato into 1cm slices and steam for 5-7 minutes, or until just soft to the tip of a knife. Cool.

Whisk all the dressing ingredients together and put to one side for the flavours to infuse. Season with freshly ground black pepper to taste.

Heat a ridged griddle pan or heavy-based frying pan for 3-4 minutes (until you can’t count to ten with your hand hovering just above it). Brush on rapeseed or coconut oil and griddle the sweet potato slices in batches for about 3 minutes per side. Keep each batch warm in a low-heat oven while you cook the rest.

In a large bowl, pour most of the dressing over the salad leaves and toss well to coat.

Serve on individual plates, adding a good handful of salad leaves to each one and topping with three or four griddled sweet potato slices. Finish with an extra drizzle of dressing, roughly chopped coriander and toasted pumpkin seeds. Serve with lime quarters.

Make this fantastic meal in a pot in a big batch and eat over several days. Even devoted carnivores will like this chilli and, served with red or black rice, it has all the flavours of a Moroccan lamb tagine. As well as the sweet potatoes and other root vegetables, the adzuki beans contain compounds that help to lower cholesterol and decrease blood pressure.

Put the dried adzuki beans into a large bowl, cover with cold water and leave to soak overnight.

Heat the olive oil in a casserole dish over a medium hob, add the chopped onions, celery, pepper, chilli and garlic, and cook for about 10 minutes until softened.

Add all the root vegetables to the casserole, along with the bay leaves, cumin seeds, oregano, paprika, chilli powder and cinnamon. Stir well, then add the drained adzuki beans, the chopped tomatoes, passata and sultanas. Season with flaky salt and freshly ground black pepper.

Cover and simmer for 30 minutes, stirring at regular intervals to prevent sticking, or cover and cook in the oven at 160°C (140°C fan oven) / gas mark 3 for 1 hour. Add the stock and return to the oven for 30 minutes. Check the seasoning and serve garnished with the fresh coriander.