Scatter runner bean flowers over any leaf salad or make this bean tabbouleh, where the flowers take centre stage.

String your beans and slice into thin strips at an angle. Like French beans, the best way to cook them is for 3 minutes in plenty of salted boiling water with the lid left off until just tender. Then plunge them into a bowl of cold water and drain.

Prepare the bulgar wheat by boiling the vegetable stock and covering the bulgar wheat with it. If you don't have any homemade, use very weak organic bouillon or even water. Leave the wheat to stand for 15 minutes in a covered bowl, occasionally fluffing it up with a fork. Drain it and press with a spoon to get rid of any excess stock, then let it cool.

Add the beans, tomatoes, lemon juice, olive oil, onion and herbs. Finally add the spices and let the salad sit for half an hour for the flavours to combine. Add the flowers just before you eat.

This recipe features on p211 of Sarah Raven's Garden Cookbook. 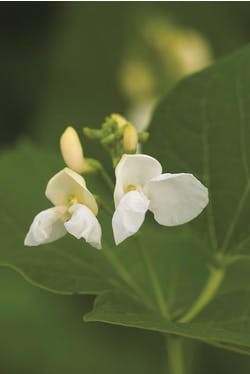