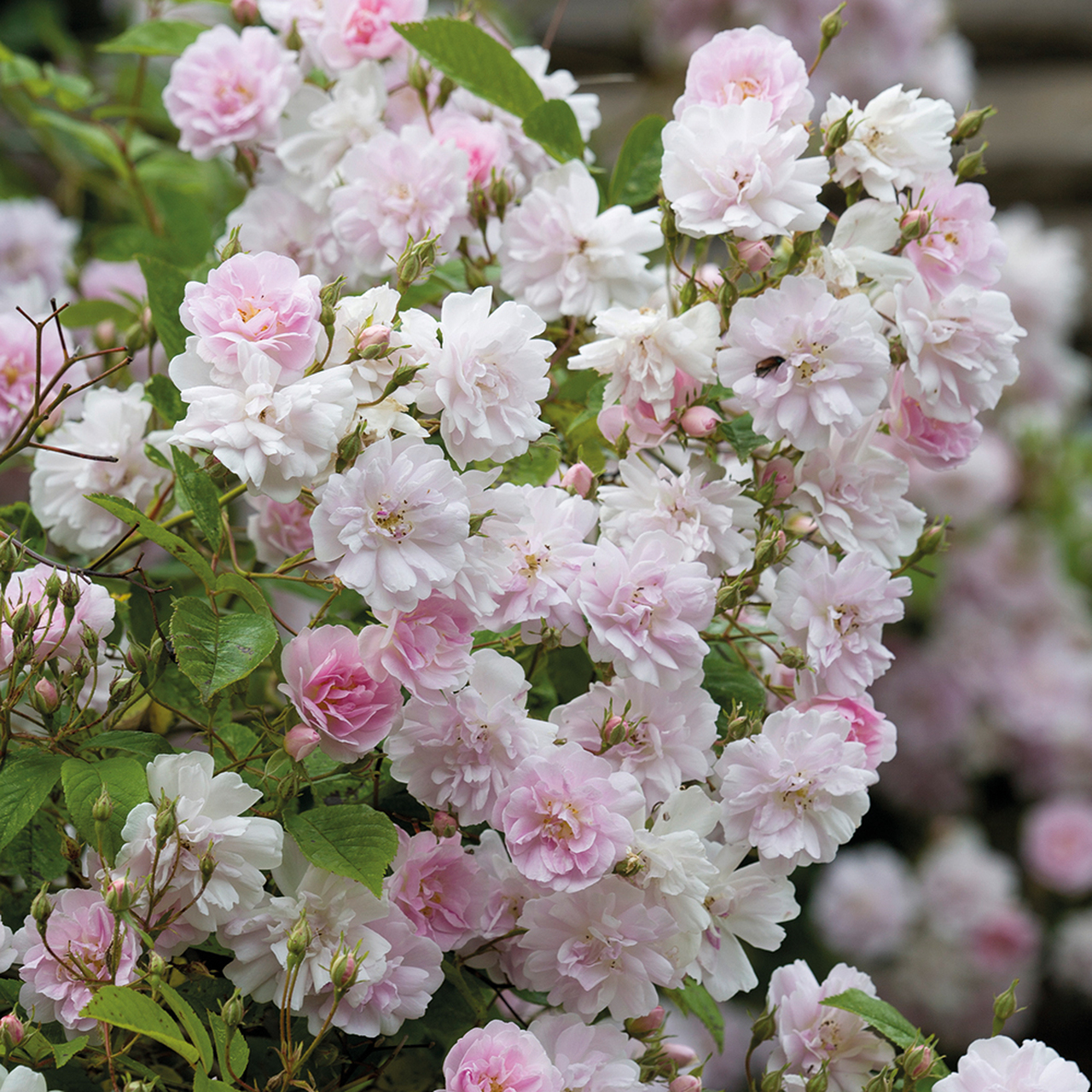 Pruning roses the Sissinghurst way helps create those wonderful fountains of roses you see in summer gardens – delicious-smelling, out-of-control geysers of flowers that effuse all over the garden. Pruning roses like this means you don't get those boring little twiggy bushes, all leg and no body, surrounded by bare ground.

The great Sissinghurst trick to pruning roses is meticulous work behind the scenes earlier in the year, when precision horticulture guarantees that wonderful romantic effect.

The Sissinghurst rose pruning technique originated at Cliveden with the Astors' head gardener Jack Vass, who moved to Sissinghurst in 1939.

Vita Sackville-West loved her roses, particularly the dark, rich Gallicas such as 'Charles de Mills', 'Tuscany Superb' and 'Cardinal de Richelieu', but it was Jack Vass who started to grow them in this exceptional way, and roses have been pruned and trained like this at Sissinghurst ever since. Other National Trust properties send their gardeners here to learn this ingenious technique.

The rose pruning philosophy can be summed up as "treat them mean, keep them keen". If you put every stem of a rose plant under pressure, bending and stressing it, the rose will flower more prolifically. The plant's biochemistry tells the bush it's on the way out and so needs to make as many flowers as possible.

The rose pruning season at Sissinghurst starts in November with the climbers and ramblers that cover almost every one of the terracotta brick walls.

First, the gardeners cut off most of that year's growth. This keeps the framework of the rose clear and prevents the plant from becoming too woody.

Next, large woody stems are taken out – almost to the base – to encourage new shoots. These will flower the following year.

The remaining branches are re-attached to the wall, stem by stem, starting from the middle of the plant, working outwards, with the pruned tip of each branch bent down and attached to the one below.

Climbers such as 'Paul's Lemon Pillar' are a bit more reluctant than ramblers like 'Albertine' and the famous Rosa mulliganii on the frame in the centre of the White Garden, which are very bendy and easy to train.

Once the wall roses are done, it's the turn of the border shrubs. They should be pruned before they come into leaf to prevent leaf buds and shoots from being damaged as their stems are manipulated. Depending on their habit, shrub roses are trained in one of three ways.

The tall, rangy bushes with stiffer branches (such as 'Charles de Mills', 'Ispahan', 'Gloire de France', 'Cardinal de Richelieu' and 'Camayeux') are twirled up a frame of four chestnut or hazel poles. Every pruned tip is bent and attached to a length below.

The big leggy shrubs, which put out great, pliable, triffid arms that are easy to tie down and train, are bent on to hazel hoops arranged around the skirts of the plant. Roses with this lax habit include 'Constance Spry', 'Fantin-Latour', 'Zéphirine Drouhin', 'Madame Isaac Pereire', 'Coupe d'Hébé', 'Henri Martin' and 'Souvenir du Dr Jamain'.

All the old and diseased wood is removed and then, stem by stem, last year's wood is bent over and tied onto the hazel hoop. You start at the outside of the plant and tie that in first and then move towards the middle, using the plant's own branches to build up the web and – in the case of 'Constance Spry' and 'Henri Martin' – create a fantastic height, one layer domed and attached to the one below. Without any sign of a flower, this looks magnificent as soon as it's complete, and in a couple of months, each stem, curved almost to ground level, will flower abundantly.

That leaves just the contained, well behaved, less prolific varieties ('Petite de Hollande', 'Madame Knorr', 'Chapeau de Napoléon', ( syn. Rosa x centifolia 'Cristata') and those that produce branches too stiff to bend ('Felicia' and the newish David Austin rose, 'William Shakespeare 2000'). These are pruned hard, then each bush is attached to a single stake, cut to about the height of the pruned bush and attached by twine. Without the stake, even these will topple under the weight of their summer growth.

For those who live in the North, where some roses are yet to leaf, you could get bending now. If your roses are already too advanced for this year, come and see how it's all done at Sissinghurst.

Browse our full range of roses, available to buy as bare root roses to help your plants establish over the winter.