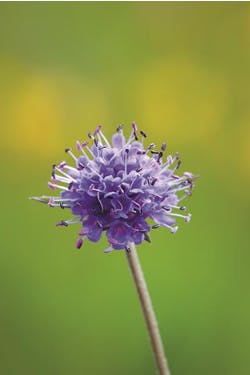 I'm on a mission to get more of us to grow British wild flowers in our gardens. As ever-increasing numbers of these plants vanish from the countryside, our own private spaces become more important – and genuinely useful. Between us, our gardens cover more than a million acres, which far exceeds the total area of all our nature reserves.

Wild flowers in our gardens

We need to think of our gardens as little reservoirs in which British biodiversity can survive. In time, it will spread out from there, but if we make our gardens wild flower hot spots, then at least we know things aren't disappearing at quite such a rate. There's plenty of evidence from the work of etymologists such as Dr Jennifer Owen (see her brilliant book Wildlife Of A Garden: A Thirty-Year Study) that gardens can provide rich habitats, with flowers the key part of that food chain.

That makes it sound like a duty, but growing native plants, from common things such as greater knapweed, field and devil's-bit scabious, weld and viper's bugloss, to relative rarities like the bee orchid makes good sense. All of these are long-flowering, easy and obliging. They hold their own among top-notch perennial garden plants so there's no sacrifice involved.

Pick of the best

A good bush of spindle stands out a mile in an autumn hedgerow, a brilliant pink beacon among the ochre, brown and crimson turning leaves of the hawthorn, elder, oak and blackthorn among which it often grows. Looked at closely, the seed pods resemble puffy Shakespearean pantaloons, with rich orange seeds hanging within them. The leaves also turn rich deep reds and oranges, starting at the tip and moving towards the stem.

Spindle is easily overlooked at other times of the year, with its small, white, four-petalled flowers, although these are a valuable source of nectar for hoverflies, bees and other insects.

As its name suggests, spindle was sometimes used for making the wooden spools on which wool was wound before the invention of the spinning wheel. The wood was ideal for this purpose because it is heavy, smooth and straight. It was also used to make toothpicks, knitting needles and skewers, as it can be cut into a sharp point.

This reigns supreme on my list of favourite British wild flowers for gardens. It's a big showy thing, like a cross between a cornflower and a thistle, with whiskery petals in a whorl. It flowers for a good eight weeks and looks fine in a mixed border; it is also excellent mixed with fine-leaved grasses in a lawn left to grow long.

The great thing about this plant is different colonies can flower at slightly different times. Pam Lewis – the wildlife gardener at Sticky Wicket in Dorset – has collected seed in the wild of very early- and late-flowering forms and has greater knapweed in flower for at least three months. It's a valuable nectar source for insects, a favourite flower of many butterflies including the marbled white and dark-green fritillary.

This is the nearest we get to a native crocus, its beautiful pink trumpets poking out of closely grazed grass. It is our answer to alpine flowers, but meadow saffron appears in late summer, not spring, and thrives in damp ground rather than freely drained sites.

The common name refers to its resemblance to the saffron crocus (Crocus sativus), from which the spice is harvested, although that belongs to the iris family. You can tell that this is a colchicum rather than a crocus because the flowers are bald in the ground with no leaves. The leaves come first, but die down before the flowers appear.

All parts of the plant are poisonous and contain the toxin colchicine. This is also harmful to livestock, so it used to be dug out by farmers. It now occurs mostly in clearings and rides within woods, where it poses no threat to grazing animals.

There are three high points to black bryony’s year. The first is when it comes streaking out of the top of a hedge in spring, with so much oomph in its growth that it bends and swirls above the hedge line as if out of control. Through the summer its glossy, slightly snaky, heart-shaped leaves decorate the hedge banks like something on a William Morris wallpaper, with cascades of tiny, lime-white flowers. Then, in the autumn, its berries form in a brilliant red. These tend to hang on longer than most hedge berries, bright and shiny like mini Christmas baubles on a chain. They provide good late food for birds but are very poisonous to us and other animals, containing a toxic glycoside called saponin. If eaten, they cause blistering of the skin and burning of the mouth, and in large quantities they can be fatal.

Bryony derives from a Greek word meaning “to grow luxuriantly”, which it certainly does at the early stage. It is a British oddity – the only wild plant in the yam family.

I have great affection for this plant because it is all over the sweetest areas of grass on the west coast of Scotland, where I spent a lot of time during my childhood and still go now. There is always plenty of it in the dry sunny spots where you set up camp to have a picnic.

It is a much bluer mauve than either field scabious or small scabious and, unlike them, it is almost fully spherical – the outside flowers reflexed right back on to the stem. Like other members of the teasel family, it is rich in pollen and nectar – it is the larval food plant of the marsh fritillary butterfly and the narrow-bordered bee hawkmoth.

Its name apparently stems from its abruptly shortened root: the Devil is said to have bitten it off in a rage at its ability to cure all ailments.

This is one of the prettiest of our wild flowers, blooming right through the summer. It has high-quality nectar for butterflies and bees, and finches and linnets love its seed. This is the largest scabious in the British Isles, with bumper-sized flowers in the palest, softest mauve. The anthers look like tiny pink, gravity-free bugs floating in the lilac atmosphere of the flower below.

It has become a popular addition to wild flower seed mixes, but grows well only on chalky soil in a border or in grass.

These usually behave as biennials, self-sowing in an open patch from one year to the next if given well-drained, gritty soil and sun. They give splashes of colour and architecture right through the summer, but you need a larger patch for these to look their best and must deadhead regularly to keep them under control.

All these plants flower in July and August, which is when our pollinators need them as a food source. Scientists at the University of Sussex have found that their bees visit towns at that time more than any other moment, flying into the parks and gardens of Brighton to find their food: a brilliant confirmation that we can all make a difference.

Stack our gardens full of nectar with the right plants and the pollinators will find it. By lucky coincidence, that's just when we want colour in our gardens and with these few British wild flowers, all easy to grow from seed, you're guaranteed not to be disappointed.

Read on to discover the wild flowers of Sicily ...