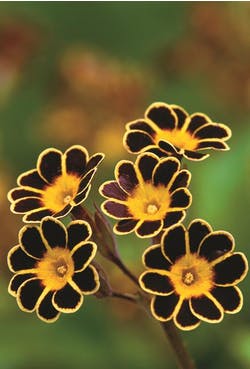 Auriculas are one of those frustrating groups of plants that are continually evolving. Just when you find one you particularly like, it is superseded by another quite similar, said to be a better performer.

They are the collector's plant par excellence. People tinker with their breeding all the time, coming up with ever more varied colour forms. Because of this I wanted to visit a gardener's collection, rather than a nursery, to work out which are the best stayers and find someone who has been growing auriculas for years – for the pleasure of looking at them, rather than making them new. I went to visit Mary Keen, the garden designer and writer, who writes for Telegraph Gardening. She has an auricula theatre, not one lined in black – as you'll see at garden shows – but painted a warm, soft lime wash in a pinky-mushroom colour.

Auriculas prefer the cool of outside, but not the wet. The show varieties, in particular, which have the floury covering to their flowers and leaves, immediately mark with a drop of water; and they hate baking sun. That's why they are traditionally grown in the shelter of a theatre, half outside, half in.

Mary's auricula theatre is tiered on wooden staging in the old outside loo, with layers of 3½in terracotta pots stretching from one side to the other. At shows, the plants are often arranged in straight vertical columns, with each plant directly above the one below, but this makes them look heavy. Arrange them instead in a rough set of dice fives, with each plant above the gap in the line below.

Mary's building has a glass roof – good for growing – but this has to be shaded in the hot midday sun as these plants thrive kept in light shade, cool and well ventilated (as alpines, they are happy with their roots frozen solid) and moist, but with excellent drainage. As alpines, they can cope with snow-melt wet, but it needs to drain fast. As Mary says – protect from rain in the winter and spring and sun in the summer.

Her auricula year starts in January, when she feeds them with a general all-round fertiliser for a couple of weeks to get them growing well, then moves on to something rich in phosphates for the rest of their main spring growing and flowering season. In the early summer she moves her collection to outdoor window sills on the north side of her house where they stay cool until the following January.

Once they've finished flowering, it's a good idea to repot into new well-drained, gritty compost – four parts loam-based John Innes No 2, two parts leaf mould and one part grit. The pots should be topped with grit after planting. You must keep them shaded and moist, and dry them off in the winter.

If as a beginner you'd like to grow a few, Mary advises trying the easier-to-grow alpines, rather than show varieties. Don't get too hung up on exact named forms. Ask for recommendations for good doers, then go on looks. Mary prefers the non-drumhead varieties, with flowers separate and petals not overlapping. She has favourites such as 'Teem' (floury textured, silver, green and crimson), 'Sirius' (an outer ring of apricot-brown and inner ring of crimson-mahogany), 'Nocturne' (deep, velvet crimson), 'Arundel Stripe' (purple and white stripe around a white band) and 'Glenluce' (incredible green-edged crimson and white), most of which she has grown for years, and with these, she has auriculas looking good from March until late May. Many plants will flower for a good three months.

I bought six unnamed, seed-grown (and so much cheaper than divided named forms) luscious plants from John Massey's nursery, Ashwood, this year in early March, already in flower, and they are still pristine. I have these in small terracotta pots on the greenhouse table at Perch Hill, mixed up with searing pink polyanthus and vast, luscious spring-flowering amaryllis. I like their dark, rich Venetian, velvet classiness next to the coarser flowers, but Mary arranges them better. If she wants a fantastic table centre, she goes to the theatre – almost any time in spring – and picks out 10 or 15 that are looking brilliant that day. They are slotted into an ingenious metal, tiered stand so they mound into a pyramid of deliciousness.

It's vital to protect against vine weevil – permanently living in pots, they are particularly prone. Mary watches for the V-shaped bites in their leaves – a sign of adult vine weevil – and uses Provado insecticide.

Happy auriculas produce plantlets from the side of their tap roots, which should be detached and potted after flowering. August is a good month to do this. With so many different varieties labelling is key, and black labels with white or silver writing look good.

If this all sounds too much bother, start with border auriculas, with tougher, more resilient varieties such as 'Argus' and 'Andre-Julie' (both velvet purples). These can be grown in troughs or at the front of borders. You can add gold-and silver-laced polyanthus to these outside groups. Halfway between the easy, resilient, long-lasting wild primrose and auriculas in their requirements, the laced group of primulas are easy to grow. I have the gold-laced variety in a single and double form by a path in my front garden and the clumps have already tripled in size since last year.