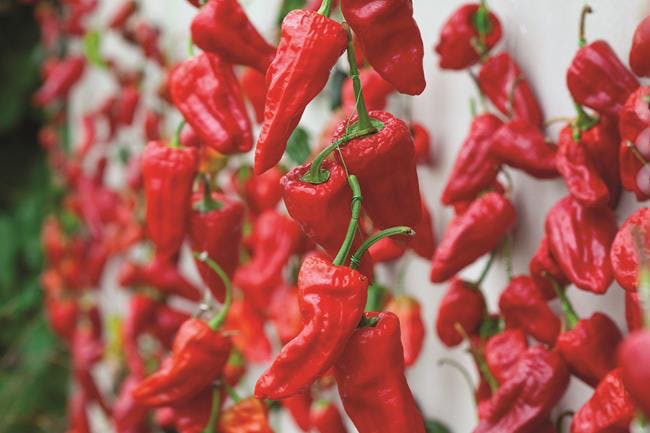 Growing chillies from seed is easy, as a general rule chillies are much more prolific and generous than its brother the sweet, not hot pepper.

In the UK, chilli seeds need to be sown early in the year, and grown on in a greenhouse or poly-tunnel. Germination can be very variable between varieties and can take as much as five weeks, though the varieties we sell should all germinate within 10-14 days, some sooner. To help you get going, we have listed some of the tricks and guidelines we use to give our chillies the best start possible and for growing them on in pots.

We recommend that you use soil-based seed and potting-on composts - chillies really appreciate good drainage. We recommend J Arthur Bowers with John Innes loam based seed compost for germination.

Germination speed and percentage is greatly improved by applying warmth to the seed compost. We use thermostatically-controlled heated propagators, but placing the seed pots/trays in a warm environment or on a simple heated tray will also work well. With the seed compost at 27-32°C (80-90°F), you should see good results. Seed will still germinate down to 21°C (70°F) but germination will be slower and more erratic. If the temperature drifts towards 38°C (100°F) germination will be quick but there will be a lower success rate. Try to use surface watering with a spray bottle rather than watering from the base, surface watering has less effect on the temperature of the compost. Don't over water, and certainly don't make them swim. Watering with a sprayer causes less impact.

We mainly sow seeds during February and March, but you can leave it later. There is a great variance in the number of days taken for a particular variety to reach maturity. Some can produce ripe fruit in 60 days from sowing and others take as long as 120 days. Remember that varieties such as Habaneros take 100 or more days (3 1/2 months) from potting on to reach maturity. So these need to be started in good time or the fruit will never ripen.

We tend to sow seeds about 5mm deep and in small pots, with a number of seeds of the same variety in each pot. Keeping each variety in its own pot is a good idea because germination time varies greatly. As soon as the majority of the seeds in a pot have emerged and are showing two well formed leaves, and certainly before they become leggy, they should be transferred into 3 inch pots. Hold the seedlings by the leaves, and not the stems. Note that some seedlings may need a little gentle help getting free of the seed pod. If you have the propagator space you can sow directly into 3 inch pots.

At this stage they should be moved to a site where they will get plenty of sunlight; ideally to a heated greenhouse or warm conservatory. Continue to keep them warm, moist and well ventilated. They can stay in a 3" pot until they are 3 to 6 inches high.

When the plants have about 5 pairs of leaves they should be potted on into larger pots. We grow most of our plants in the ground and this is a possibility if you have a polytunnel or open soil in your greenhouse. Otherwise pot on into 9 to 12 inch pots depending on the variety. You can use smaller pots for compact ornamental varieties. As the summer sun intensifies, you may need to provide some shade, for example, lining your greenhouse or painting with greenhouse paint.

Try to keep the plants below 36°C, don't feed them a lot of nitrogen and don't let them dry out. That should help prevent blossom-drop and pod-drop. Larger varieties may need support with a cane. Ornamental varieties can be moved to a bright position in the house or to a patio once they are well established. Most chilli plants can be treated as perennial house plants, but they may need some pruning in the spring.

There are some varieties which do fine outside. I’ve had a fantastic crop of ‘Filius Blue’ from my vegetable garden two years running and Steve and Jason are trailing a new as yet unnamed import from America ‘Jalapeno 3087’. which is a stubbier plant than normal and so has better wind and weather resistance and sets fruit at lower temperatures so it has been growing happily and cropping heavily too, but most successful chilli growing is done inside.

Most chilli plants can be treated as perennial house plants, but will need some pruning in the winter. Some varieties are better suited than others, smaller hot varieties like Serrano and Twilight, and Prarie Fire fair better than the bigger fleshy plants such as Poblano and Anaheim.

I spent the day with a couple of renowned 'chilli-heads', Steve Waters and Jason Nickels of the South Devon Chilli Farm. Both are chilli obsessives, growing seventy different varieties with six thousand plants to sell fresh, process and store. As they will tell you, chillies are addictive and once you’ve had one or two good sessions tasting and eating chillies, most of us go back for more. They contain capsaicin, a natural chemical that sends a burning sensation from the nerve endings in the mouth to the brain. The body defends itself against this pain sensation by secreting endorphins, natural painkillers that cause a physical "rush" in the same way as the opium-derived drug morphine. As a result, you feel good and the high keeps us coming back for more.

Chillies have been hot property in America – particularly New Mexico - for decades, with restaurant chains like the ultra chic, Santa Fe Café, and many cookbooks featuring chilli centred things, but it’s a new and quickly growing passion for us Brits. West Deane, the ornamental kitchen gardens in West Sussex, with its fantastic collection of greenhouse productive plants, have had a chilli festival for 10 years and every year it grows. At their first event, they had 20 stalls with 2500 people visiting. 10 years later they had 90 stalls and 15,500 people came.

Steve and Jason have had a similar experience. They set up the chilli farm as a side line to IT jobs just over four years ago. They mainly sold at local Devon Farmer’s markets and week on week, the interest grew. They quickly had to throw themselves fulltime into their rapidly expanding chilli business, selling plants, seeds and delicious chilli jams, jellies, sauces and their run-away-success, chilli chocolate from their market stalls. As well as farmers markets, they now sell fresh chillies and all their other chilli products via their web site and to delis and farm shops. The fruit is picked one morning, to be on your doorstep the next. In four years they’ve grown from just them, in a couple of spare garden centre polytunnels, to buying their own plot of ten acres of land, planting an orchard – tart crab apples are the best things to use for chilli jelly - a shop, and a large processing unit producing thousands of jars and bottles in one harvesting season.

You can buy your chillies, or you can grow them and that’s what I’m now doing. I’ve been growing the stalwart, hugely prolific Hungarian Hot Wax and the very pretty and searing hot Filius Blue for years, but I’m trying to expand my repertoire. One of their most popular varieties is the Jalapeno. It’s a medium hot general purpose chilli, with chunky, fleshy fruits and fantastic productivity. The fruits are ideal for smoking when red and are perfect for salsas and sauces when green. You want a thin flesh for drying, but a meaty fleshiness for smoking and that’s exactly what Jalapenos have. The fruit has characteristic vertical striations on the skin which makes them look like they’re cracking, but in fact means the fruit is in its prime. This makes Jalapenos difficult to get your hands on here, as this lack of pristine perfection rules them out from the supermarket shelves.

Cherry bombs are another excellent variety which look like mini red apples hanging on the plant. The fruits are medium hot and with Hungarian Hot Wax, are the first to ripen, harvestable as early as late June. They are another easy and vigorous variety and prolific producers of fruit. The flesh is quite thick which makes them ideal for salsas and you can easily scoop out the middle and stuff them. Both these and Hungarian Hot Wax are lovely barbecued, stuffed with cream cheese.

Steve is also very keen on the Peruvian Aji, which are medium hot chillies with an interesting flavour. They are quite citrusy when fresh and have a hint of banana when dried. The fruits are long, beautiful bright yellow chillies. They are easy to grow, tearing away as seedlings to produce large rangy bushes carrying tons of fruit. They have the longest picking season of all the forms they grow at the South Devon Chilli Farm and are very cold weather tolerant. They have over-wintered these in their polytunnel through last winter on a regime of total neglect. I like the sound of that.

Moving up the heat scale is the Habanero, a beautiful square-ish chilli in bright golden-orange. They grow more of this chilli on the farm than any other type, as it’s the main component to their hot chilli sauce, which won a gold medal in the Great Taste Awards 2005. This variety needs more TLC than others, requiring a lot of heat to germinate (26) and the plants mustn’t then fall below 20 degrees at night. The Habanero are the first to drop the leaves when the temperatures fall in the autumn, but they are surprisingly tolerant of shade.

Steve and Jason also recommend ‘Thai Superhot’, a lovely-looking plant, thick with small very hot fruits, like Christmas decorations on a stem. This is an easy variety with a vigorous, tight springy, bushy habit which doesn’t need staking and is ideal for growing in pots. This is ideal for drying.

Their final recommendation is for ‘Twilight’ a beautiful looking chilli with multi-coloured cream, green, red and purple fruit covering the plant at the same time. This makes small, compact plants, ideal for growing on a window ledge. The fruit is very hot, but they are a good all rounder in terms of culinary uses, excellent dried and fresh.

The heat comes from the oil called capsaicin in the chilli. The highest concentration is in the seeds and the "ribs".

Chillies strength is marked on the Scoville scale. Wilber Scoville invented the scoville test around the turn of the century. Until very recently, it was used to rate chili peppers for hotness. Now, a test which uses liquid chromotography rates the heat level of chillies, but this is still converted back to give a Scoville grade

If you burn your mouth with chilli, drinking water will do no good because capsaicin is not soluble in water. (It's like trying to wash away grease with water) Milk products cool you off after eating chillies because casein, a protein, breaks the bond between the pain receptors and the Capsaicin.