I want to create a mini paradise for insects at Perch Hill, a place that gets everything right for them and that will look beautiful, so that we can sit and watch hoverflies, butterflies and bees having the time of their lives.

I’ve been able to tap into incredible sources of advice about pollinating insects through a three-part television series I made for BBC Two. I now know that getting a garden right is a bit more complicated than planting a few nectar-rich flowers.

First, choose a site as sheltered as possible. Being blasted by the wind is not conducive to easy feeding by light and airy insects, so a walled, hedged or fenced weather-protected garden is ideal. It doesn’t need to be a whole garden. You can make an insect-lovers patch in a corner, in a few pots on a doorstep or on a window ledge, but shelter is the number one essential.

The sunnier it is the better. Insects are much more active when the sun is out. They go to ground on cloudy, wet days. We already have a small garden on the south side of our house which fits this wishlist well. Given that Perch Hill is indeed perched on a hill, this is as sheltered a site as I can find. 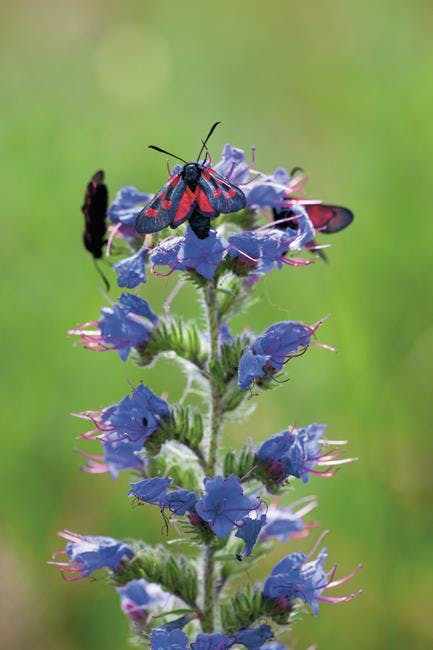 Bear in mind the obvious – that insects and flowers have a symbiotic relationship. Flowers attract the insects with nectar. Nectar is the all-important food, rich in carbohydrate, that is the insect’s reward for visiting the flower; pollen transfer is what the insect gives back.

For maximum nectar, a good general rule is to avoid double flowers. Double begonias, busy lizzies and bedding geraniums may look showy, but they’re pretty useless as far as insects are concerned. Often the nectaries at the centre of the flower have been transformed into extra petals, so in these very complex, double flowers the nectar source is often dry. The extra petals also make it more difficult for insects to gain access to their food, so even if the nectar is there, they have to shoulder petals aside to feed, making it more likely they’ll cruise past.

The colour of the flowers is also an important factor, with nectar-rich varieties tending to be in the blue, pink and purple colour range, with yellow added, too. Paler flowers are important for the night-feeders. So I’m choosing violets, mauves, whites and blues for most of my new plants, with plenty of highly scented flowers such as Trachelospermum jasminoides, Nicotiana sylvestris and sweet peas.

I’ve purposely chosen a mixture of all types of plants – shrubs, perennials, bulbs, grasses and annuals – to pad out what’s already there, so there’s a good mix of heights all through the garden. Different insects like different habitats, so you need a wide variation. Bees love tall, airy things and tend to stick in that middle layer, so I’ve planted allium bulbs, Angelica gigas, Cephalaria gigantea and tall single dahlias such as Dahlia 'Bishop of Auckland’, Dahlia 'Classic Rosamunde’ and Dahlia 'Twinings After Eight’ for them. However, hoverflies like to stick closer to the ground and prefer to feed on plants like the annual cerinthe, shorter single-flowered dahlia such as 'Roxy’, and ground-hugging hardy geraniums.

Butterflies like large open flowers that give them a secure landing pad, so echinaceas, rudbeckias, cosmos and sunflowers such as Helianthus 'Lemon Queen’, are ideal for them and bees.

There’s new evidence from Dr Simon Potts, principal research fellow at the Centre for Food Security at Reading University, that insects – like us – need a varied diet. The traditional cottage garden was perfect for insects, with a huge number of different plants all crammed in, offering varied nectar sources as well as shelter and habitat. Today’s more minimalist gardens, with limited plant species and lots of paving, gravel and grasses, do not attract so many insects.

Lots of different types of nectar build the bees’ immune systems, and without the diversity of food, colonies can become weak and vulnerable to fungal and viral diseases.

Succession in flowering is also key – aim to have nectar-rich plants in the garden every month from March to October, when insects are most active. It’s worth skewing flowering times in favour of late summer and early autumn, when there is less in the wild for insects and arable crops such as oil seed rape have been harvested. Late-winter flowers are a life-saver for insects woken up prematurely by unusually warm days, so crocus and a daphne or winter-flowering viburnum are good things to plant.

In Paul Hervey-Brookes’s nectar-rich garden at Chelsea last year he showed good combinations for succession, with hardy geraniums planted with veronicas. The geraniums flower early in the summer, but then go over and can look quite untidy. As the geraniums finish, the veronica pushes out all its foliage and covers the geranium as it dies.

A drop to drink

Don’t forget that insects need water. I had an insect-friendly audit done on my garden by an experienced naturalist, Steve Head from the Wildlife Gardening Forum, and that is one point on which my garden fell short.

“Bees use several litres of water a day on a hot day to keep their hive cool and it takes 40,000 trips by a bee to get a litre of water. So put out a container which is very shallow at the edges and you’ll do the pollinators a huge service,” he says.

See more pollinator-friendly plants in our Plants for Pollinators category.