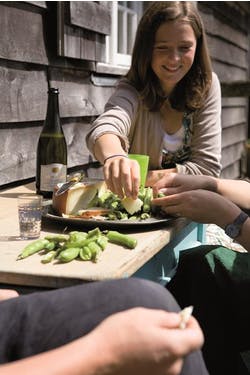 Broad beans want eating at about the size of a thumbnail, but they're often twice that size when you buy them - leathery-skinned and starchy. So, it's really worthwhile growing your own, as you can eat them at every stage. In Italy and France, you'll be served the pods cooked whole, when they're only a few centimetres long. In Italy, you'll eat the beans raw, when they're small, with Pecorino cheese.

This is a dish I had with an American friend of mine, Stephen Orr, who cooks the broad beans over a wood fire and then serves them as an appetiser while the rest of the meal is being cooked.

Put the whole bean pods on a very hot open grill 20-25cm above the flames (depending on the heat). Once they are soft and blackened on both sides (about 5 minutes), transfer the pods to a plat. Allow to cool a little, then serve as they are for people to shell themselves.

To eat, dip each bean in a little of the salt and squeeze over some lemon juice, then wrap one or two beans together in a sliver of Pecorino.

This recipe features on p.182 of Sarah Raven's Food for Friends and Family