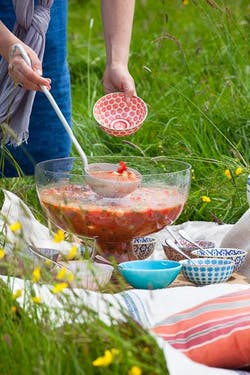 A fantastic, healthy meal in itself, this soup has the crunch of cucumber and intense flavour of summer tomatoes. The key thing is not to chop the veg too finely: the chunks should be about 1cm across. It's also essential to start making this soup at least a couple of hours before you want to eat. It's best eaten really cold, so needs an hour or two in the fridge.

I like to eat this with cornbread or fluffy white bread and unsalted butter (the picture shows a double quantity of the soup).

Coarsely chop the tomatoes, and chuck away the hard woody cores.

Shell the hard-boiled eggs and separate the whites from the yolks. Coarsely chop the whites and put to one side.

In a large bowl, mix the mustard, olive oil, vinegar, garlic, torn bread and egg yolks to make a paste. Add the tomatoes and all the vegetables, then the tomato juice. Stir it all together. Taste, and season with plenty of salt and pepper. Add the chopped egg whites just before putting the soup in the fridge to chill thoroughly.

To serve, lade into bowls and top with a little oregano and a swirl of extra virgin olive oil, or better still, a Basil oil ice cube.

This recipe appears on p126 of Sarah Raven's Food for Friends and Family.